KenHina is the slash ship between Kenma Kozume and Shōyō Hinata from the Haikyu!! fandom.

Hinata and Kenma are both volleyball players at different high schools, while Kenma is a second year setter at Nekoma, Hinata is a first year middle blocker at Karasuno. They first meet when Hinata accidentally runs off track during practice with his team. After they talk for a bit, Hinata immediately notices Kenma's shy nature, but he still holds a friendly conversation with him. When Kenma gets picked up by Kuroo, he states that they'll see each other again soon. Hinata's confused at first, but understands what he means when they see each other again at the practice match between Nekoma and Karasuno.

After their practice, Hinata promises to make Kenma say that volleyball's fun and also to beat him one day. This is later fulfilled in Chapter 322. When Kenma falls to the ground from exhaustion after a long rally, he says "that was fun" making Hinata rejoice after hearing that. In addition to that promise, during the Tokyo training arc, Kenma tells Hinata that he wants to play a game against Karasuno other than a practice match, "you know, one that means it's instantly game over!" With that, Hinata's determined to beat Kenma.

Also during the Tokyo training arc, Kuroo's impressed that Hinata got Kenma to participate in personal training, even though it was for 5 tosses. He also states that Kenma always looks excited when he watches Hinata play. However, Kenma says that he wouldn't want to be on the same team as Hinata, as his dedication and passion is too much for his rather relaxed and calm personality during gameplay.

Throughout the course of the manga and anime, the two are very close friends, both calling each other by their first names, as well as text each other regularly about matches and other things. In the timeskip before Hinata goes to Rio, he meets Kenma again, as he becomes his sponsor, showing they still have a strong friendship after school.

Though KenHina is the second most popular ship for both characters, they still have a lot of fans. In fan work, they stick to the canon, showing them as very close friends and also presenting their ship as "fluffy". Other fanworks show the two in relationships, KageHina and KuroKen, and sometimes, the two characters try and hang out without their boyfriends being jealous or seeing them. But overall, their ship is healthy.

On AO3, KenHina is the second most written ship for both Hinata and Kenma. 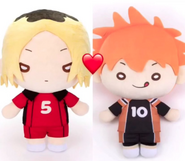 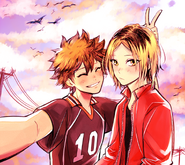