Hobby
Kenma is a pro-gamer (post-timeskip)

Kenma x Video games is the cargo ship between Kenma Kozume and video games from the Haikyu!! fandom.

Kenma started playing games since he was a kid. His friendship with Kuroo even started out with them just playing video games. Kenma often played games, even after entering high school. Kenma normally plays games on his phone or on his blue PlayStation Portable. At one point, Kuroo had to take Kenma's game console so he would eat.

Kenma's volleyball team heads out for a practice match with Karasuno, but Kenma gets lost and separated from everyone. He ends up playing a game on his phone. Hinata, who also got lost and separated from his team, finds Kenma and starts a conversation, but Kenma is more focused on his phone than Hinata at first. Hinata asks if the game Kenma is playing is fun. Kenma replies that he just played the game to pass time.

In Chapter 2, Kenma plays in a tournament at an arcade. Kenma wins the first round and later wins the second round where he faces an opponent named Atsuhara in no time. Kenma also easily wins against a robot named G-1000. Kenma even goes against an alien with the ability to read hearts. The alien is unable to read Kenma's heart, allowing Kenma to easily beat him.

Kenma is declared the winner of the tournament, but a new challenger arrives. The challenger claims to be the master of gaming and ranked first in Japan. Kenma overwhelms the master despite the master's win streak of 580 rounds. Kenma is given a plane ticket to America so that he could rank first in the world. Kenma ends up not going since it's a hassle he didn't want to deal with. 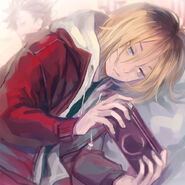