Kether is the het ship between Keqing and Aether from the Genshin Impact fandom.

The two first interact in Act III of Liyue’s Archon Quest, where the Traveler fights and defeats the Millelith troops guarding the Guizhong ballista on their way to the Jade Chamber. The altercation ends when Keqing approaches, asking what is going on. She introduces herself to the two as she realizes that they are Ningguang’s invited guests. They have a brief discussion about Keqing’s skepticism of the gods, afterwards commenting the Traveler is a good listener. She then gives Aether the directions to the Jade Chamber and departs.

Keqing would later on be present for the battle against the Overlord of the Vortex alongside Aether. She fought together with him against the Fatui as they attacked the Guizhong Ballista. Following the conclusion of the battle, she approaches him at the Rite of Parting area and offers to repay them for their aid during the Osial confrontation. Aether requests help in setting up missing person posters around Liyue. She later comments that if he were looking someone, he could have just told her in private.

On Keqing's birthday, players received a letter from her directed towards the Traveler. Keqing offers to show Aether around Liyue Harbor. She says she'll disguise herself so they can spend time together, just the two of them.

In her voicelines, Keqing talks about a variety of topics with the Traveler. She gives him an electro lantern on his birthday for when he needs light in his life. At one point Keqing calls the Traveler the person of her dreams, but notices his surprise and clarifies that she meant her dreams for the future of Liyue. In her final ascension voiceline she asks if the Traveler will still be by her side when her dreams come true.

“We've been on our fair share of adventures together, haven't we? The more time we spend together, the more I think you're the person of my dreams, and— Huh? Why so shocked? You're a crucial part of my dreams for the new Liyue.”
— Keqing

“I want you to make me a promise: come and visit when the new Liyue Harbor is born, I will show you around. After all the help and support you've given me along the way, you deserve to see Liyue reborn with your own eyes. I owe you that much.”
— Keqing

“I feel I have grown immensely from my travels with you. If, one day, I finally manage to make my dreams a reality... I wonder, will you still be there by my side?”
— Keqing

“I've put a few more hours in these last two days to finish all the work I might have in the near future. Since it's my birthday, I'll show you around Liyue Harbor. The night markets here are full of places to go. Between the shops that sell artisan handicrafts and those who hawk little gadgets and trinkets, even a light stroll is well worth your time. I'll change into more ordinary clothes, and disguise myself a little, so I don't get recognized by the citizenry. That way, we can spend some leisure time shopping together — just the two of us.”
— Keqing's First Birthday Mail

“I've been up to my neck in work lately, and before I knew it, it was my birthday again. It was only then that I also realized that it's been a long time since we last met up. How have things been lately? You're always so busy with your travels, never stopping, not even for a moment. I suppose we're alike like that — always seizing the day. It's good to live to the fullest. Time waits for no one, but the fruits of our labor, the growth we experience... These are worthy harvests that will see us through in the days ahead. But of course, rest is also paramount. I have enclosed some flowers and plants that I usually make tea with. They dispel heatiness and help to relieve fatigue. Take care of yourself out there. We'll catch up when you're back in Liyue.”
— Keqing's Second Birthday Mail

Despite their limited interactions in the main story, many people ship Aether with Keqing. The ship is usually overshadowed by Ganqing and many more popular Aether ships. Many fans were driven to support Kether due to the letter sent to the Traveler by Keqing in honor of her birthday and from her voicelines. On AO3, there are currently over 100 fanfictions of this pairing. It is the third most written ship for Keqing. 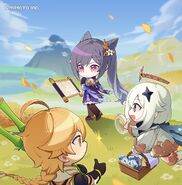