Kiibouma is the slash ship between K1-B0 and Kokichi Oma from the Danganronpa fandom.

Their relationship seems to be interoperated as more of a love-hate relationship. They were seen together in the prologue, and they introduce themselves around the same time, with Kiibo going first. While they are seen together, Kokichi asks to feel his body, saying he always wanted to feel a robot, though Kiibo did not seem comfortable with this. Kokichi later asks about Kiibo's private parts, and Kiibo told him not to ask such questions.

Throughout the game, Kokichi was seen addressing Kiibo as "Kee-boy", even though he asked to be called Kiibo. He continues to tease Kiibo, although this does not seem to have any malicious intent. Kokichi always points out that he is a robot, whenever he mentions anything about being a person. However, Kokichi childishly chases him, wanting to be friends with him, and attempting to touch him, seemingly not noticing his actions could be seen as offensive, and that Kiibo is very uncomfortable. Kokichi also was the one who suggested they throw Kiibo to break open the water tank in chapter two. Even though Kokichi treats him in this way, Kiibo still wants to be friends with him.

When entering the Neo world program, Kokichi doesn't hesitate to slap Kiibo to test if they feel pain. Even after it was revealed, Kokichi does it again.

In chapter 5, Kiibo tries to confront Kokichi using words, trying to avoid violence and settle things peacefully. after the fifth trial, Kiibo is the one who believes Kokichi's last words were the truth.

On the whiteboard in Kokichi's room, it says he thinks Kiibo is "weird".

The ship sailed as a result of their canon interactions. People often interpret Kokichi attempting to touch Kiibo as a form of attraction. Both of them being implied to be able to have romantic feelings for the same gender also helped. however, they both have ships that are seemingly more popular, such as Saiouma and Oumota for Kokichi, and Kiiruma and Saiibo for Kiibo. The famous question: "do robots have dicks?" also helped fuel the ship. 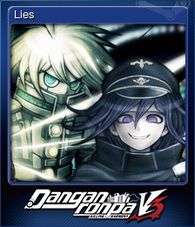 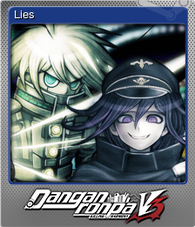 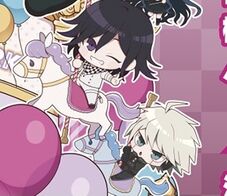 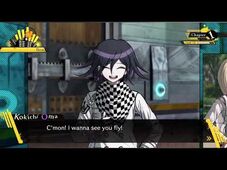 Kiibouruma refers to the ship between the two and Miu Iruma