Close Friends/Classmates/One-sided Crush on Miu's side; both are dead

Kiiruma is the het ship between K1-B0 and Miu Iruma from the Danganronpa fandom.

Both Miu and K1-B0 get along pretty well despite the fact Miu is disliked by the other students due to her behavior and inappropriate comments, with the exception of Kaede and Gonta. Before being friends Miu considered K1-B0 as 'useless' and 'weak', she made an offer to the robot about giving him some upgrades and most specifically would want to upgrade his private area. Miu is shown to have a romantic interest in K1-B0 but it's currently unknown if K1-B0 knows about this admiration from Miu.

The two are first seen together in Chapter 3 by Shuichi who both unknowingly know he's hearing their conversation, Miu offers K1-B0 to clean his body as he was incapable to do so, although very flustered by Miu's offer he agrees anyways. The duo is seen together in Miu's Ultimate Lab as she performs the maintenance on K1-B0 in a very such position, as Miu was on top she begins to clean K1-B0's body meanwhile he was very flustered at how Miu was laid on top of him. As she experiments K1-B0 Miu suddenly touches a sensitive area on K1-B0's body that lets out a 'cute noise' described by her as well she found K1-B0 very cute, it's unknown what happens afterward in this scene but the two are seen together more often afterward.

As K1-B0's Ultimate Lab is revealed in Chapter 4 Miu is shown to be very excited as she'll be able to give much more upgrades, as well she wanted K1-B0 to make 'cute noises' but K1-B0 responds to this blushing and telling Miu not to mention it as Shuichi was with them. It's as well shown that both of their labs are connected.

When Miu's corpse is first found by K1-B0 and Maki, K1-B0 responds to her death very sadden and wished he could cry but couldn't as Miu never added the crying function for him. During her trial K1-B0 would tell the students how Miu was a good person as he got to know her more during the time they spent time with each other, especially he would see sides of Miu which were unknown to the other students. In the next chapter, he mentions to Shuichi that Miu had a 'natural innocence' in her.

In the Ultimate Talent Development Plan, both Miu and K1-B0 are shown to be very close as Miu helps K1-B0 take care of his body in the three years they spent in Hope's Peak Academy. Before graduating, K1-B0 tells Miu how grateful he is for having her and will miss her after graduating but Miu responds to this angry as she thinks K1-B0 is just 'throwing her away' and assumes that K1-B0 might have other people other than her but K1-B0 explains that their graduating and hopes for someone like her to be good with technology who will take care of K1-B0 in his needs, Miu tells K1-B0 why doesn't he just move in with her which the two both agree on, which K1-B0 responds how thankful he is in advance.

The ship sailed as a result of a lot of ship tease between the two, especially the "maintenance scene". The two having compatible talents, with Miu being the Ultimate Inventor and K1-B0 being the Ultimate Robot also helped. So did K1-B0 being one of a few students who actually liked Miu and having the most positive interactions with her.

Because in Chapter 4 Monotaro thought K1-B0 was his father and Miu was his mother (the role which she quickly accepted), in some fan fictions and fan arts, the two are portrayed as a family with Monotaro as their son. 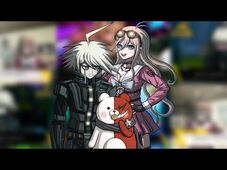 A Gift For Keebo (Comic Dub)

MMD Miu does maintenance on Kiibo