• Battle Couple — Killua and Gon spend much of the series working together to take down bigger enemies
• Birds of a Feather — Killua initially approached Gon because they were the same age, and then because they're similar in other ways. They're both prodigies no one can keep up with who love danger
• Declaration of Protection — Killua repeatedly risks his life for Gon's sake. 'I need to protect him'
• You Are Worth Hell — In the Chimera Ant Arc, Killua accepts that he will die beside Gon. 'In a worst case scenario, it will be a lover's suicide'

“Gon, you are light. Sometimes you shine so bright I have to look away. But even so, is it still okay if I stay by your side?”
— Killua, monologuing internally

Killugon is the slash ship between Killua and Gon from the Hunter x Hunter fandom.

Killua and Gon have been best friends with a complicated and somewhat codependent relationship since the first few episodes/chapters. Killua uses very heavily romantically laden terminology towards Gon which implies the ship is at least one-sided. He's also shown to blush when Gon says something about Killua being his best friend, and often delivers internal monologues about Gon, further "canonizing" the ship.

Most of the series follows Killua and Gon's adventures together. They are one another's closest friends, and develop the most next to one another. They get the largest relationship developments during the Chimera Ant Arc.

Killua and Gon first meet when they take the Hunter Exam together, and grow into fast friends because they are the only two who are the same age. This is interrupted when Illumi, Killua's brother, tells Killua at the end of the final part of the exam that someone like Killua has nothing he wants and should return home. Killua states that his largest desire is to be friends with Gon, and Illumi interjects that his desire is really to kill Gon, not befriend him. Leorio, Gon and Killua's mutual friend, interrupts this to say that Gon and Killua are already friends regardless of what Illumi says. Either way, the impact of Illumi's words is devastating for Killua and he returns home.

Gon, who has been unconscious for these events, wakes up and decides he immediately has to get Killua back. He confronts Illumi about what happened, tells him he's a horrible brother and (unknowingly) breaks his arm during the confrontation. Gon and Killua's mutual friends accompany him when he goes to Killua's family's mansion to get him back. There, Gon undergoes several tests of endurance and pain to get Killua back. He succeeds, and a depressed Killua cheers up to hear Gon came up for him. Killua tells his father all about Gon, and he gets permission to leave with him.

After they leave the Zoldyck mansion, they decide to train together in Heavens Arena. During this arc Killua expresses his admiration for Gon, and admits to Wing, their mentor, that he and Gon are a bit similar in their recklessness.

Killua asks if its okay if he can visit Gon's home with him. Gon agrees. One night while star watching, Gon confesses to Killua that he's his first friend. Killua admits the same is true for him. Gon says he always has fun when him and Killua are together, and asks if he wants to stay with him while he tries to find his dad. Bashfully, Killua agrees.

During a reconnaissance mission they get captured. Killua offers to take on the enemy alone (and die) so Gon can get away, but Gon hits him on the head and says he can't say things like that. Killua points out Gon's hypocrisy, because Gon often says things like that. Gon replies "I'm allowed to but you aren't!" They both manage to escape after.

Gon expresses concern for Killua multiple times after a spell is cast on him. They join a group that holds a possible solution, but after the group says some things that upset Gon he declines their offer. Killua tells the group he can't join them because 'the leader' (Gon) declined and rushes after him. Gon apologizes for declining the offer even knowing about the spell cast on Killua.

Gon thanks Killua for coming to Greed Island and doing all this with him to help him find his dad. Killua thinks to himself that no, he's not doing this just to find Gon's dad. He's doing this for... (Killua doesn't finish his thought but it's heavily implied he is doing this simply because he cares about Gon). Gon tells Killua he's glad he met him, and Killua thinks in response 'No Gon, meeting you makes me the fortunate one'.

In one of the Greed Island Tutorials, Gon tells Killua that ‘He can look through his binder any time he wants’ while smiling and seemingly blushing. This was meant to be comical, but could be an implication of flirting.

They meet a new mentor, Biscuit, and she comments herself that they 'make a great team'.

Later on they have to play a game of volleyball and Gon needs to use a powerful attack on it. Killua is the one who holds the ball for him. He hides his injuries from holding the ball for Gon, but someone else on the team discovers it and offers to hold the ball in place for the winning goal. Gon admits he knew about Killua's inuries but that 'It has to be Killua.' These words visibly surprise Killua and its clear he takes them quite to heart after. Killua holds the ball for Gon and they end up winning the game.

In this arc, Killua and Gon's codependency on one another reaches its peak.

Killua is forced to knock out Gon when they encounter an enemy that is too difficult for the two to handle, and Killua runs carrying Gon away from the enemy. After reaching town, Killua expresses regret that he left Kite, their mutual mentor, alone to die. Gon tells Killua he didn't, that Kite is surely okay. Killua then declares one of his most famous monologues on Gon: "Gon, you are light. Sometimes you shine so bright I have to look away. But even so, is it still okay if I stay by your side?"

After this, they practice and eventually face against Knuckle and Shoot while trying to earn the ability to go back to the Chimera Ant Arc. Killua is given an ultimatum by their other mentor Biscuit that if Killua can't beat Shoot, 'he should leave Gon's side'.

Gon loses his nen temporarily to Knuckle in his fight with him, and Killua loses his battle with Shoot. Killua then comes to the conclusion 'he will have to leave Gon's side', but he decides to stay with Gon until he regains his nen to protect him.

When Gon cries about how painful it is to be weak after losing his fight, Killua's face twists in sympathy.

During his time without nen, Gon promises to go on a date with Palm to make up for the fact they lost the fight with Knuckle and Shoot, as they promised her they would win it. Killua asks Gon if he's ever been on a date before, and Gon says he has. Killua's surprised and thinks 'wow Gon's a real adult!' but then Gon clarifies he's including dates with his mom/aunt, Mito. Gon asks Killua if he's ever been on a date, and Killua replies he's never been on one, he's only ever been with Gon, and thinks 'and I really don't want that to change'.

Killua follows Gon and Palm on their date, and feels embarrassed about the fact it looks like he's obsessed. During the date, an ant attacks and Killua takes him on solo. During the fight, Killua has a breakdown because he wants to run away but also wants to protect Gon. When he thinks to himself about his fear of losing Gon, he cries out 'Gon is my precious friend. My most precious friend in the whole world' and while reflecting on memories of Gon he manages to find that his brother, Illumi, planted a needle in his head and rip it out. Having done so, he deals with the ant and feels more confident returning to Gon.

The ship has been the most popular in the HxH fandom since the manga started publishing in the 90s on all sides of the fandom. In fanworks, it is usually depicted alongside Leopika (Leorio + Kurapika).

Togashi, the mangaka, has written multiple LGBT characters in the past which gives some precedence to believe it may be made canon by the end of the series.

During the Heaven's Arena arc, Hisoka (a transmuter nen user) says that 'Gon and him have good compatibility' because Gon is an enhancer, and Hisoka is a transmuter. It's often thought this dialogue is purposefully also referring to Gon and Killua, since Killua is also a transmuter. 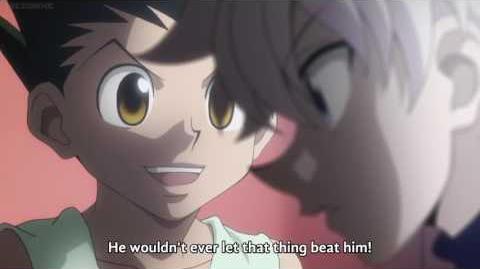 "Gon, you are light" scene
Retrieved from "https://shipping.fandom.com/wiki/Killugon?oldid=167691"
Community content is available under CC-BY-SA unless otherwise noted.