View source
watch 02:56
Doctor Strange in The Multiverse o Madness - The Loop
Do you like this video?
Play Sound
WOAH! THAT'S ONE SMALL SHIP!
• THIS ARTICLE IS A STUB. YOU CAN HELP BY EXPANDING IT •
Stub pages are deleted after 4 months. If not filled out enough, KimiNoa will be deleted on
6/4/22

Seraph of the End

“Y'know, I've never given two craps if either of you like me.”
— Kimizuki to Shinoa and Mitsuba

KimiNoa is the het ship between Shiho Kimizuki and Shinoa Hiiragi from the Seraph of the End fandom.

Shiho and Shinoa sometimes have a complicated realtionship but do get along as teammates and friends. After Mitsuba and Shinoa try to cook an omelette, but fail and burn the omelette complete. Kimizuki is seen to take over the cooking for the two. When Yuu along with Kimizuki laughed at Shinoa because she is to short to drive. Shinoa was beating the two up as a warning what would happen when they mock her, for her height.

Before Shinoa was becoming Yuichiro's supervisor, Shinoa was Kimizuki's supervisor and tried to teach him how to make friends. Shinoa seemed to enjoy Kimizuki's and Yuichiro's constant fighting and seemed to find it entertaining. Shinoa seemed to know that Shiho was suspecting her to manipulate the squad members. But he agreed to discuss the matter, because as squad members they should be honest with each other. Shinoa would find a way tease Shiho, by teaming up with Mitsuba to act as him and Yu being more than friends as a joke once.

Both Shinoa and Kimizuki don't have much similarties with each other. Both have a sister that is important to them, both are also in the same squad, the "Shinoa Squad" which Shinoa leads. Personality-wise the only similarity that both have is that both sometimes have a brash personality, with Kimizuki attempting to beat everyone up that makes fun of him and Shinoa beating up everyone that is mocking or teasing her about her height. Both were also one of Yuichiro's first friends.

The sailed as a result of Shiho's and Kimizuki's opposite personalities. Shiho's and Shinoa's relationship is a perfect example of the "opposites attract" trope, which is a main reason why some people may enjoy the ship. Shiho's official relationship chart, appears to be a refute to the pairing, as Shiho mentiones what he looks in the opposite sex (it's implied, it's for a romantic partner), is someone who won't desert him at the end of the hallway, which Shinoa did. The ship is considered a rare-pair within the fandom often overshadowed by MitsuNoa and KimiYoi. 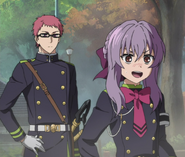