KiriMina is the het ship between Eijiro Kirishima and Mina Ashido from the My Hero Academia fandom.

Mina and Eijiro are good friends and are often seen together with the rest of the (fandom dubbed) "Bakusquad". The two were both on Team Bakugo during the Sports Festival arc and seemed to work well.

They both attended the same middle school; Mina was the rising star of their school, while Eijiro was teased for having a 'weak quirk'. Mina was basically the embodiment of everything that a modern-day pro hero is, with a flashy quirk and social attitude, while Eijiro was like the embodiment of old-school, outdated heroes, where popularity and flashiness didn't matter; it was just about being heroic and manly.

Previously unaware of who she is, Eijiro finds out about Mina when he sees her successfully stop some bullies he had previously failed to apprehend. She distracts them by breakdancing with both the bullies and the victim and then sends them on their way. One of Eijiro's buddies points out that Mina herself is very athletic, outgoing, strong, and eye-catching. Eijiro seems to admire Mina for how naturally amazing she is but also begins to feel self-conscious compared to her. He thinks of himself as dull and useless. In comparison, he, Eijiro, and the others are boring and wouldn't cut it with today's societal standards of being a pro.

This is later reinforced when he attempts to stop a villain, Gigantomachia, but his legs freeze up in fear, and he cannot move. Mina shows up and stops the villain herself, leading it in a fake direction so that the villain could leave their classmates alone and they could get away safely. Witnessing this incident almost causes Eijiro to give up on his dream of attending U.A. ultimately since when it came time to put his life on the line, he couldn't do anything. Crimson Riot's words later in an old video at home convince Eijiro to keep pursuing his dream of becoming a hero, and he reapplies for U.A. as a result.

Eventually, Eijiro goes to the girls from that incident and Mina, and he apologizes to them for his cowardliness. Mina's friends both question who he is since they'd never seen him before and then attempt to reassure him that it's fine and that Mina is just that amazing. Eijiro, however, still has a look of guilt on his face, which Mina can be seen noticing.

Later on, both Mina and Eijiro take the U.A. entrance exam, which they end up passing.

On their first day of high school, Eijiro goes through a complete appearance change, dying his hair red and spiking it up in a style inspired by Crimson Riot. His hairstyle also appears to have two little horns. Mina sees this and says, "You got horns! Just like me!" To which Eijiro responds, "Darn right! Don't touch 'em, though!" At this moment, Eijiro vows to Mina that he will say goodbye to his pathetic old self and swears that he's going to be the kind of hero who never has any regrets.

The past incident with Gigantomachia has really taken a toll on Eijiro. The guilt was eating him alive. Mina picks up on this and points it out, to which Eijiro self-consciously responds with, "Yeah, so what?" So she lightens the mood, poking him repeatedly and telling him not to overload himself with pressure, expressing concern for him playfully. She asks him how he will move on and say goodbye to his old self if he's still pulling the same old gloomy face as before. She then laughs at Eijiro and tells him to tell her when he really does overcome his regrets from the past and his old self, and that if he doesn't then, she'll spread rumors at their new school (U.A. Academy) about how he's just putting on a front. He smiles back at her in agreement and apologizes.

At U.A. School Festival, while Class 1-A practiced stage performance, Hanta mentioned Mina is such a demon-coach, but Eijiro defended by told Hanta, "Because when you love something, you can give it your all" this shows that Eijiro knows how much effort she put into a stage performance.

Later on, after Eijiro gets back from the hospital after his fight with Rappa, Mina comes up to check on him. She asks him if he's ok, to which he responds, "I have a long way to go..." Mina replies, "I see." and goes to play with Koji's bunny, leaving Eijiro with his thoughts.

When she sees him breakout his Unbreakable form in training, Mina is visibly impressed and goes, "Wow!" Eijiro doesn't respond, too caught up in wanting to find a way to improve himself after he almost died fighting Rappa to notice, and goes off to train with Katsuki, Sato, and Izuku. Later, however, she draws inspiration from his Unbreakable form to make her own super move: Acid Man. Which she brags about to Eijiro, teasing him. Ejiro gives her a surprised look with happiness and pride and responds with an "...oh!"

During the Joint Training Arc, Eijiro was praising Mina for her effective attack. He also got concerned when she got attacked.

In the Paranormal Liberation War Arc, Eijiro rushed through fire to save Mina from being crush by Gigantomachia and managed to grabbed and take her falling 30-liter vial filled with sedative with him; it later shows that he failed to throw his own vial into Gigantomachia's mouth due to Himiko Toga destroyed it by throwing her knife at him. Hence, he used Mina's falling vial to threw into Gigantomachia's mouth while thought back to Mina that her chivalrous spirit is in good hands. They have survived Gigantomachia destruction and go saving other injured heroes together.

According to My Hero Academia Official Character Book 2 Ultra Analysis, Eijiro and Mina's relationship got called "The Awakening of Chivalrous spirit". Mina can encourage Eijiro, who had an inferiority complex and regrets. Her care and kindness touched his heart.

After Izuku felt U.A, both attended the battle of Class 1-A and Izuku later bringing back Izuku to U.A.

Eijiro's prototype was revealed to have gone to U.A. to impress a girl from his middle school. Because Mina is the only known character to have gone to his middle school, many fans started speculating that Mina was the girl he had a crush on and was trying to impress. However, it seems that this idea was scrapped since his motive of going to U.A. changed from his original prototype.

Given the above, fans of the ship often refer to KiriMina as the supposedly "official" pairing for both characters. While the romantic nature of their affection for each other has not yet been canonically affirmed in any way, their increasing interactions in additional content are often interpreted to support this.

While the ship isn't very popular in the BNHA community, this ship is popular among fans of the Bakusquad as well as shippers of TodoMomo, KamiJirou, BakuDeku, IzuOcha, & TsuChako shippers. After a fourth season flashback, the ship received even more attention and support and confirmed Mina's importance to Eijiro, romantic or otherwise. 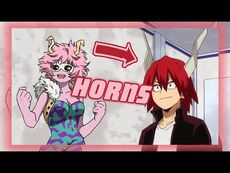 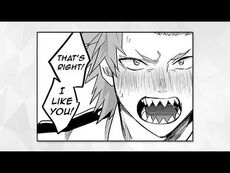 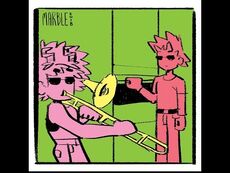 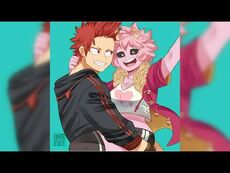