• Disappeared Dad — Jin abandoned his family after a major dispute, leaving Kyoko to be raised by her grandfather.

Kirigiri Family is the family ship between Jin and Kyoko Kirigiri from the Danganronpa fandom.

Jin was born into the Kirigiri family and was planned to be the heir by his father, Fuhito Kirigiri. The family was extremely strict about their lineage, but Jin did not wish to follow suit. Because of this, Fuhito began to loathe his son, and eventually disowned him. At some point, Jin married a woman from the Uzuchi family, and they had a daughter together named Kyoko. Once Fuhito had gotten word of his granddaughter's existence, he had ill-intendedly invited his son to rejoin the family, so that he could mold Kyoko into his new heir. This caused Jin to resent his father even more, and the final straw came when Fuhito didn't even allow Kyoko to attend her own mother's funeral, after she had fallen ill and passed away. After a huge argument with his father, Jin had left the family for good. Leaving Kyoko to be raised by her grandfather, who encouraged her to hate her father who had abandoned them and their family traditions. While the two didn't see each other anymore, Jin continued to think about his daughter.

Many years later, Kyoko was scouted by Hope's Peak Academy, which was currently under the administration of her father, Jin. Even though her family made a conscious effort to conceal their existence, Kyoko accepted the offer, and entered Hope's Peak Academy as the Ultimate Detective. Kyoko's motivation for doing this was because she wanted to confront her father after years of separation. Not to make amends with him, but to sever all ties with him.

It is unknown if Kyoko had ever gotten the chance to approach her father about what she wanted to tell him during her time at Hope's Peak. However, not long after the Tragedy had started, Jin had devised a plan to seal the students inside the academy building, in order to protect them from the horrors taking place outside. Like the other students, Kyoko was asked by Jin directly if she could consent to living at the academy indefinitely, to which she had accepted.

Around a year after Jin's plan was set in motion, he was overthrown and executed by two of his students, who would then go on to murder nearly the entire student body, and use the school as the location for a killing game between the only surviving students. Unlike most of the other students who had only had their school memories stolen from them, Kyoko had also been stripped of her memory of her Ultimate Talent, as the mastermind feared her abilities would interfere with their plans. In doing so, Kyoko's memory as to why she had come to the school in the first place was also lost, meaning she had forgotten that her father was the headmaster of Hope's Peak Academy.

In Danganronpa: Trigger Happy Havoc, Kyoko would regain her memory of her father at some point during the investigation in Chapter 5. Kyoko continued to harbor a grudge against her father for abandoning the family, and was still fully committed to finding him so she could remove him from her life completely. During the investigation in Chapter 6, Makoto Naegi discovers Kyoko inside of the headmaster's private room, and the two find a gap in the wall, leading to a hidden room on the other side. Kyoko believes that they access the room by using a program on the headmaster's PC. However, she can not figure out the password, even after multiple attempts. When Makoto suggests that the password might be Kyoko's name, she is understandably apprehensive, but she allows him to try it anyways, confident that his guess will be incorrect. The password turns out to be correct, much to Kyoko's dismay. When the two enter the room, they find a brightly colored present sitting on top of a table, which is revealed to contain the boney remains of the headmaster. Kyoko is seemingly unmoved by her father's apparent death, but Makoto suspected that she was feeling more than she let on. Afterwards, Makoto finds a faded picture of the headmaster and Kyoko when she was only a little girl, further causing her distraught at the implications that her father still cared about her after leaving. After completing their search of the hidden room, Kyoko calmly asks Makoto if he can leave so that she can calm down and get her emotions in order. Makoto complies, giving Kyoko some time to herself.

During the final Class Trial, Junko Enoshima asks if anyone knows who was responsible for turning Hope's Peak Academy into a shelter. Makoto answers that it was the headmaster, causing Kyoko to tense up at her father's good intentions. Junko continues to taunt Kyoko by telling her that the least she could do is honor her dead father's wishes. During the vote, Makoto convinces Kyoko not to give up hope, and Kyoko reminisces about what she's learned about her father since regaining her memories. She ultimately decides that he wouldn't want them to continue living at the school, and even seems to reconsider her perception of him slightly.

“I don't blame him, you know. He had his own life to live. That's what anyone in my position might say, right? But it's not true... But there's one thing... One thing that I can never forgive. The way everyone else looked at me. I was never sad about being left behind. Like I said, I think it was a good thing. But when the rest of my family looked at me, they saw something different. They only saw me as the little girl that was abandoned by her father. That's how they see me even to this day. His shadow has been following me my entire life. I'm sick of it. I need him out of my life. I need to step out of his shadow. That's why I have to find him, and tell him we're no longer family. In order to settle the past... In order to remove him from my life forever... I have no doubt he forgot about me years ago.”
— Kyoko explaining why she can't ever forgive her father, and why she needs to cut ties with him.

“...! ... Well, this is annoying. I came here to cut myself free of the past. And yet... To now find something like this... So what do you expect me to do now...?”
— Kyoko in utter devastation after finding out that her father kept a picture of them.

“Why? What...? I wanted to face him and tell him myself. To cut him out of my life for abandoning me... That's the whole reason I came here. And now he's abandoned me again. And this time, he even stole the only opportunity I had to move on. Has there ever been a worse father...?”
— Kyoko continuing to resent her father after his death.

“Maybe that picture motivated him, maybe he hoped to see me again someday. Is that what you were going to say? If so, it's just a theory. And this isn't an issue that can be settled with theories. That picture doesn't change the fact of what happened, what I went through. That problem can't be solved so easily.”
— Kyoko adamant that any theories about the picture won't solve her problems.

“I didn't really know my father, so I can't pretend to know what he was thinking. But even if we're just connected by blood, there's one thing I *am* sure of... He would never want us to abandon Makoto and choose to stay here. I can't explain why exactly. But if I'm sure of anything, I'm sure of that... Just because we don't actually know anything, does that mean we can't understand...? Could it be that...? ...No, never mind.”
— Kyoko beginning to understand what her father's intentions were.

While one of the more highlighted family relationships in the series, the Kirigiri family seems to mostly be ignored by the fandom, as there does not exist an overly large amount of fan content dedicated to Kyoko and her father. This may be due to Kyoko's serious resentment of Jin, along with the fact that the two are never seen in each others' presence, and so their relationship is only built on inferences. 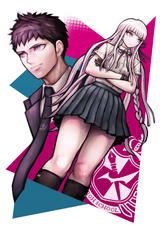