Kirihina is the femslash ship between Kyoko Kirigiri and Aoi Asahina from the Danganronpa fandom.

Although they don't have as much interactions, they do have a good amount. In chapter 4 of Danganronpa: Trigger Happy Havoc, she pulled Makoto Naegi aside to talk to him. She asked him if Kyoko seemed upset to him and blames him for upsetting her. Calling him dirty for upsetting her and defending her.

Kyoko becomes close friends with Aoi after joining the Future Foundation with her and the other survivors. When Aoi decides to help Kyoko defend Makoto, she shows concern for her, knowing that she'll be blamed as well if she continues to do so. Aoi is one of the few people Kyoko has complete faith in, smiling when Aoi states her willingness to protect Makoto.

During the events of the Final Killing Game, Aoi and Kyoko reunite for a short spell to which Aoi hugs Kyoko open seeing her, showing how their bond has grown (especially considering Kyoko's usual dislike for physical contact). Aoi also calls Kyoko "Kyoko-chan", which she seems to like. Some of Aoi's expressions indicate that she knows Kyoko and Makoto like each other, and she appears silently very happy for them.

The ship sailed as one of the possible pairings between the survivors of the Killing School Life. Aoi defending Kyoko in Chapter 4 of Danganronpa: Trigger Happy Havoc after believing Makoto hurt her and the two being shown to be close friends in Future Arc helped to further fuel the ship. Them reuniting with their hug especially fueled the ship. So did the two appearing on some promo arts together, especially the one where they're both wearing swimsuits.

The two are also the main characters in the Final Killing Game besides Makoto. With Makoto already being able to be shipped with everyone besides the rest of the Final Killing Game's cast due to Free Time Events, this can lead to some fans shipping Kyoko and Aoi together. Some also ship it due to Aoi being very cheerful and open about everything whereas Kyoko is much more secretive, mysterious, and stoic; making them polar opposites.

While somewhat popular, the ship is nowhere near as popular as both girls' ships with Makoto or Aoi's ship with Sakura. It's also common to ship the two together with Makoto as an OT3 of (seemingly at first due to promo materials) the only returning Killing School Life survivors in Future Arc. 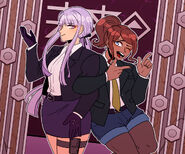