Kirizono is the femslash ship between Kyoko Kirigiri and Sayaka Maizono in the Danganronpa fandom.

Kyoko and Sayaka haven't been interacted much. The one thing that connects them is the fact that they both have been Makoto's love interests. It was confirmed when they occurred in his hallucination, Sayaka's ghost has been representing his first love, implying that Kyoko is his current love. In Chapter 1, when Sayaka was discovered dead, Kyoko told Makoto about a possibility that Sayaka left an evidence pointing to Leon being her killer because she still cared about what happens to Makoto. Kyoko believed that in the end Sayaka regretted her actions.

They also have an event together in Danganronpa V3's bonus mode, Ultimate Talent Development Plan. In it, the two are about to play a volleyball game. Sayaka asks if Kyoko is alright as she may be tired, being always busy with detective work. Kyoko asks the same, reminding her she's always busy with being a pop star. The two decide not to worry and focus on the game by doing their best.

Both girls seem to have a strong sense of what is right and what is wrong. Sayaka did originally want to leave Hope's Peak before plotting to frame Leon's murder on Makoto. Before her death she did seem to care a lot about her idol group who had already been killed. She did originally want justice, and to her that meant leaving the high school of despair, any way she could. Kyoko suggested that she did not want Makoto to take the blame in the end. And, similarly, after Kyoko betrayed Makoto to save herself from execution she did apologize and regretted what she did. They shared a mutual friend, Makoto, and seemed to get along alright themselves.

In one of their events during Danganronpa S at the summer festival, Kyoko goes to an restaurant to see fireworks, but Sayaka misunderstanding says they’re closed. Kyoko then asks Sayaka what she’s doing there alone, and she says she’s relishing the moment. Sayaka then says some other stuff, and apologizes for dumping it all on Kyoko, however Kyoko says it was educational, not caring. They also have another event together, Sayaka asks Kyoko if she wants some cold sweets, and Kyoko accepts the offer.

“Her final thought... ...was how she could protect you. The fact that she used her last ounce of energy to leave her dying message proves it. If she didn't care what happened to you, she never would have left that message.”
— Kyoko telling Makoto about a possible sympathetic reason behind why Sayaka wrote Leon's name, in Chapter 1 of Danganronpa: Trigger Happy Havoc.

“You're always busy as well. Don't worry about me–you should worry about winning the game.”
— Kyoko telling Sayaka not to worry about her in Ultimate Talent Development Plan.

Kirizono sailed as a result of a sort of love triangle between the two and Makoto Naegi. Some fans excluding Makoto in order to pair him with someone else, most commonly Aoi Asahina or Byakuya Togami. Although, their shared love interest was not the only factor that contributed to their overall popularity. Their personalities are the opposite of each others'. Some fans who ship Kirizono enjoy a stoic detective like Kyoko being paired up with a bubbly pop star like Sayaka. 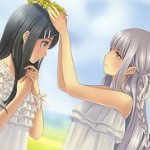 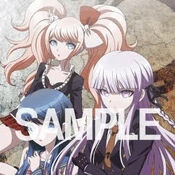 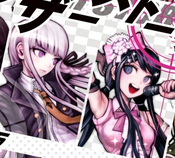 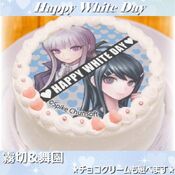