Friends/Classmates; Both are dead

Kirukaede is the femslash ship between Kirumi Tojo and Kaede Akamatsu from the Danganronpa fandom.

The two only have interactions in chapter one.

When Kaede meets Kirumi, she calls her talent cool and is very impressed by Kirumi, calling her amazing. Kirumi insists that Kaede is exaggerating. Kaede later refers to her as a "super maid."

In their first Free Time Event, Kaede as surprised when Kirumi says she also wants to talk to her and tells Kirumi to ask her anything. Kirumi ends up asking her about her preferred foods and bedding materials, confusing Kaede. Kirumi says that she is asking these questions since Kaede's comfort (and everyone else's) matters very much to her as a maid, and that she will also ask these questions to the other students. In their second free time event, Kaede becomes irritated with Kirumi for taking everything as a request and says that the others will become too dependent on her. Kirumi assures Kaede that she doesn't mind the work, but becomes offended when Kaede says everyone will start calling Kirumi "mom" if she continues. Kaede talks to Kirumi about how she needs to consider her own needs as well for the people she's serving to truly appreciate it. Kirumi considers this and thanks Kaede.

Throughout the chapter, Kirumi trusts Kaede and finds her leadership skills impressive. This trust holds even when Kaede is discovered as Rantaro's killer in the first trial. Kirumi states that they can try to trust the Kaede they've come to know, even if she committed a crime. She also says that she firmly believes that Kaede's intentions were to protect everyone and agrees to fulfill Kaede's final wish of ending the killing game and escaping along with everyone else, although breaking this promise in Chapter 2.

The ship sailed as a result of the similarities between the two, as both are supporting girls who take care of the rest of their classmates. Free Time Events between the two and Kirumi's trust in Kaede also fuel the ship. So did the fact that Kirumi was one of the students most determined to fulfill Kaede's wish, even if she ended up breaking this promise later.

The two are considered a rare pair, but have a fair amount of supporters. However, Kirukaede is overshadowed by more popular ships for both characters, such as Saimatsu, Irumatsu, Amamatsu and Tojoshi. While it's one of the less obvious choices for Kaede, it remains as one of the more popular shipping options for Kirumi.

Fan fictions and fan arts usually focus on the girls' caring side that they have in common. Usually, the fan art shows the girls helping each other in some way. Sometimes, the help is changed to Kirumi providing her service to Kaede instead.

The ship began to grow more popular after user @Pretzelmintz began making more content for the ship on YouTube, Instagram, Twitter, Tumblr, and Ao3. She is stated as the unofficial “ceo of Kirukaede”. He is also known for making “catified” designs of Kirumi and Kaede, often show in shipping art and ‘map’ parts 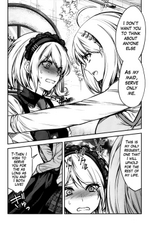 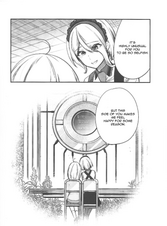 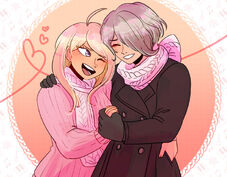 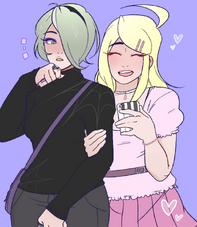 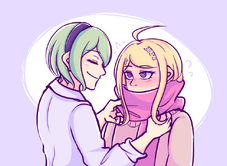 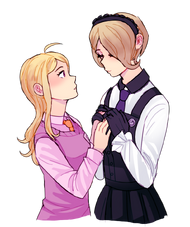