Kirukiyo is the het ship between Kirumi Tojo and Korekiyo Shinguji from the Danganronpa fandom.

The two rarely interact in canon. However, they still share a fair amount of interactions.

In Chapter 1, before the murder happened, Kirumi and Korekiyo were together in the dining hall, along with Miu Iruma and Tsumugi Shirogane.

In Chapter 2, when Kirumi said that she had spent five minutes in the gym to prepare the magic show alone, incriminating herself, Korekiyo proudly exclaimed that her spirit of self-sacrifice was just "too beautiful'. He also praises the culprit's cold and calculated plan, although at that point he isn't aware that Kirumi was the killer yet.

In Chapter 3, Korekiyo complimented Kirumi's attempts to survive in the previous chapter. Although he also called them pathetic and ugly, he claimed that he also viewed them as beautiful as a result, as he always appreciated human flaws. At the end of the trial, Korekiyo claims that only Maki and Miu aren't worthy of becoming his Sister's friends. Although it's unknown whether he included already deceased Kaede and Kirumi (in Kaede's case, at least their Free Time Events confirm he thinks she's worthy), it can be assumed that he considered them worthy of becoming his Sister's friends as well as he did not mention them among the exceptions.

“Our cooperation is the number one factor in our suffering, is it? Kehehe... How, I wonder, will this turn out...? I will observe with great interest... Oh, and Kirumi, I shall have you record my observations. I trust you to do it properly.”
— Korekiyo trusting Kirumi to record his observations properly.

“Personally, I find this culprit frighteningly thorough. Such a bold, beautiful plan! I never even imagined there was a ropeway! Aaah! Respect begins to bloom in my heart for this wonderfully cruel culprit.”
— Korekiyo praising Chapter 2's culprit (without knowing their identity).

“Kirumi... She, too, had her own exceptional beauty. A crime that was bold, yet calculated... A battle against the truth... Brutally killing others for her beliefs... Unfeelingly sacrificing the few for the many... And her attachment to life and determination to live! Her attempt to escape was so very ugly! It was pathetic! Pitiful! Wretched! But it was beautiful! I had never before seen such beauty in a human being before!”
— Korekiyo about Kirumi's attempts to escape, in Chapter 3.

The ship sailed mostly because of a specific similarity between the two - their common love for humanity, with Kirumi being devoted to serve everyone and considering her nation's people her most important people, and Korekiyo being interested in human behavior and culture in general. Both sharing an interest in Victorian history also helped. What further fueled the ship is that both of them speak in a very formal manner and are usually very calm (unless pushed to their limits). Korekiyo praising Chapter 2's culprit during the trial (even though he didn't know who it was at the time) and later praising her attempts to survive in the following chapter further helped to fuel the ship.

Due to their few interactions, the ship isn't that well-known. As a result, it doesn't get that many fan arts dedicated to it. However, for such a rare pair, it still gets a large number of fanfictions. Its main ship rivals include Sairumi or Tojoshi from Kirumi's side and Amaguji, Shinnaga, or Shinsai from Korekiyo's side. Regardless of whether this ship wins over the others in popularity in various parts of the fandom or not, it is preferred by those who are aware of it over Korekiyo's canon incest relationship.

Fan arts and fanfictions would usually focus on their commmon traits, with the two bonding over their shared interest in humanity. Korekiyo would sometimes be interested in Kirumi's devotion to serving others and help her value herself as a human being more. In turn, similarly to a brief moment from canon, Kirumi may also sometimes help Korekiyo with his research of humanity and human culture. Being interested in culture, Shinguji may also be sometimes shown interested in Tojo's status as a de-facto Prime Minister of Japan. 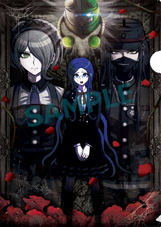