Kirumaki is the femslash ship between Kirumi Tojo and Maki Harukawa from the Danganronpa fandom.

The two barely interact in canon.

In Chapter 2, Maki tells Kirumi to bring her dinner at night, the former needing to guard her Research Lab. During the Investigation, Maki and Kirumi team up to investigate.

In the Class Trial, Maki describes Kirumi as "skilled'. She also contradicts Kirumi's alibi by saying she had met with Ryoma Hoshi at night. With the help of Shuichi Saihara, she pins the maid as the prime suspect.

In the manga anthology, Tsumugi Shirogane forces Maki and Kirumi to cosplay as characters from an anime together. She casts Kirumi and Maki as love interests resulting in a rather romantic scene. There is also a scene where Kirumi brings Maki lunch after Maki ran laps around the academy. Kirumi then recruits Maki's knife skills to help her cut fruit for the other students.

Although the ship is quite rare, it still has its supporters. This is mostly due to the fact that they are two of the most "mature" students in Danganronpa V3. The manga anthology also helped fuel it, due to the scene described prior.

The two are both quiet, calm and serious so they would probably get along well. It appears that both would be willing to fight for each other, perhaps even kill, as Maki is an assassin, and Kirumi was one of the killers. Both their outfits go together too. Both wear black and another muted color as a prominent part of their outfits.

While Maki's Ultimate Talent of Child Caregiver was a cover, it goes well with Kirumi's Ultimate Talent of Maid, as both are jobs where one must look after another person or group of people. It is thought that because of this, the two would take good care of each other in a relationship. Kirumi especially, as it's in her nature. Some people think that Kirumi would help Maki show her caring and concerned side more openly.

As it is not as common a ship, it has many rival ships that are much more popular than it, including Harukaito, Nursery Rhymes, Kirumugi, and Tojoshi. 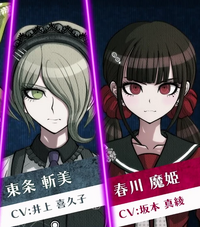 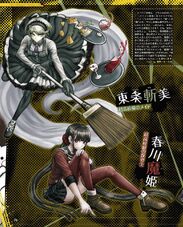 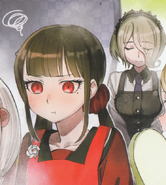