“You're the first person I've been able to talk to like this, Hitoka-chan.”
— Kiyoko to Yachi

KiyoYachi is the femslash ship between Hitoka Yachi and Kiyoko Shimizu from the Haikyu!! fandom.

Kiyoko is a third year student at Karasuno High School, as well as the official manager of the Karasuno Boys Volleyball Club. Yachi is a first year and is to become a manager for the Volleyball Club (Kiyoko asked her to take her place after she graduated)

Upon their first meeting, Yachi becomes so dazed by Kiyoko’s beauty that she zones out. Yachi has admitted (in her mind) that she finds Kiyoko very attractive- even going as far to call her mole 'sexy'. Yachi blushes very often if she sees Kiyoko and thinks if she walks next to her assassins would come to kill her because she also thinks Kiyoko is the most popular and beautiful girl in the school. In turn, Kiyoko has been seen to blush at times because of Yachi.

When they are together in the baths, Yachi (in her mind) admits that she is 'so nervous when it is just the two of [them]', and the first thing that she can think of to say is how Kiyoko still wears black tights during the summer. Kiyoko tells Yachi this is due to the scars on her legs from running hurdles, which she has not told anyone else about. This shows that Yachi is the person Kiyoko trusts the most in the show and that she feels comfortable enough to open up to her. Yachi calls the scars 'badges of honours' and Kiyoko responds with a look that can be interpreted as awe on her face. Yachi then is embarrassed about this remark and apologizes, to which Kiyoko responds by laughing and saying that it 'makes [her] really happy'. Kiyoko openly admits that Yachi is 'the first person [she's] been able to talk to like this'. She then stands up (naked) and Yachi's blush deepens. They make a promise to revisit the bath after they win the next match, and Yachi's eyes begin to water slightly.

They have become good friends and are usually seen together. Yachi is known to be very frightened easily, especially by the boys on the volleyball teams, and Kiyoko is often there with her which seems to ease Yachi's nerves (sometimes she will hide behind Kiyoko). Kiyoko has become more open in the club due to Yachi being another female; Yachi has really helped her come out of her shell. Kiyoko also is very open to Yachi more than anyone else in the show. She has talked about personal things, like why she wears leggings, and other things like volleyball.

In time skip, we see Kiyoko finally being proud of the scars on her legs, quoting Yachi's 'badges of honours' comparison.

In Volume 1, chapter 11, the Nekoma team play a dating simulator. Kuroo and Yamamoto attempt to date a character called ‘Kiyokawa’ in this game, who resembles Kiyoko very closely. However their advances are rejected and Kiyokawa reveals she is already dating a boy who very closely resembles Yachi. Kuroo even says the ‘elements of reality are a little too much’.

When Saeko and Madoka are fighting over whoever of the two are the prettiest, Daichi calls Kiyoko and Yachi who meet up over there at the same time. They then have a friendly reunion, which makes Madoka and Saeko tear up.

As with MomoJirou from My Hero Academia, KiyoYachi quickly became a popular ship, being a rare femslash pairing in a predominantly all-male shounen franchise. The fact that there is no particular emphasis on romance in the title and the relationship of both heroines is mainly focused on friendship with each other also helped fuel the ship. This ship is considered very fluffy and healthy. Some however still prefer TanaKito for Kiyoko or HinaYachi/YamaYachi for Yachi. But for the most part they respect KiyoYachi shippers nonetheless. Although KiyoYachi do have a considerable amount of content in fanfiction, they are often a side pairing rather than the main focus.

Furudate gave a statement as to why he gave Yachi her current name: “I gave her the image of earth and plants because Kiyoko-san is ‘water’ (水)." 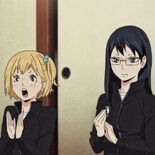 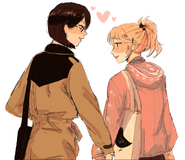