Best Friends, Both are dead

Kizajin is the slash ship between Koichi Kizakura and Jin Kirigiri from the Danganronpa fandom.

Koichi was close friends with the deceased headmaster of Hope's Peak Academy, Jin Kirigiri. Koichi had known Jin for a long time, even before Jin had left his family. Although Koichi constantly annoyed Jin, he usually confided in Koichi about school and emotional problems, which Koichi would sometimes try to help with. Koichi was very loyal to Jin, respected him, and always trusted his judgment. He was also one of few people who could keep Jin calm.

In episode 11 of Despair Arc, seeing that things were taking a turn for the worse, Jin put his faith in Koichi, making him promise to protect his daughter if something befell him. Koichi was determined to keep this promise, especially after Jin's death, and ended up sacrificing himself for Kyoko. In his final moments, Koichi remembers taking a picture of Jin and Kyoko and tells Jin that he was able to keep his promise.

“Level-headedness has always been one of your strengths”
— Koichi complimenting Jin in the dubbed version of Episode 7 of Despair Arc.

“Hey, if anything happens to me, look after my daughter.”
— Jin asking Koichi to protect Kyoko.

“I'd never give her to you.”
— Jin mockingly saying that he'd never let Koichi marry Kyoko.

The ship sailed as a result of Jin and Koichi's close friendship. Given how Jin left his family and Koichi was there to take a picture of him and young Kyoko Kirigiri, some fans believe these two were homosexual partners. Whether that was or wasn't the case hasn't been directly confirmed. 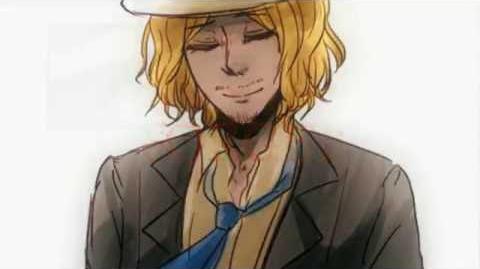 An 𝓪𝓷𝓰𝒆𝓵 should never touch ground. kizakura kouichi
Retrieved from "https://shipping.fandom.com/wiki/Kizajin?oldid=126620"
Community content is available under CC-BY-SA unless otherwise noted.