“And yet... Alice had a daughter, named Klee. "We'll be a family from now on, treat her like a real younger sister!"”
— Knights of Favonius to Albedo

KleeBedo is the familyship between Klee and Albedo from the Genshin Impact fandom.

Both of them have never interacted in the Main Story; however, they have voice lines about each other:

Me and Albedo have a secret code! Whenever he puts a sign on his workshop door saying "Experiment in Progress", thats the code for "come back later, Klee." Albedo's really nice and he's so patient with me, so I don't mind waiting until he's finished with his work.

In Klee's voiceline "Interesting Things", she also says something about Albedo:

Every lizard has a different pattern on his back, and some of them can use their dried-out to make gunpowder with. I know because Albedo told me so.

Indeed, I view Klee as my younger sister. Whenever she gets herself into some explosive sort of trouble, I can only console myself with the fact that her current destructiveness is nothing compared to Miss Alice.

In "Story 3" it is confirmed that Klee is Alice's daughter. Alice is the the author of the Teyvat Travel Guide and a Traveler. Its also said that Alice left her daughter to travel somewhere dangerous with a traveling companion. Alice left Klee with Albedo and the Knights of Favonius. From that day on, Albedo considered Klee as his younger sister and took care of her with the Knights of Favonius, and he also took care of Klee's "remedying disasters".

It's unknown if Klee also thinks of Albedo as her big brother, but going from the canon material, she most likely thinks of him as a brother or father figure. In Albedo's story it is stated that Klee is somewhat fond of Albedo. It is also stated that Albedo is good in taking care of children, which is why he's so good with handling the "rambunctious" Klee. Klee seems to annoy Albedo sometimes, but he seems to always forgive her since she is still young. It's also said that the Knights of Favonius take care of Klee, which means he is not alone with her, and has some help.

Albedo has mentioned on his story quest that he takes care of a certain child.

In the Midsummer Island Adventures, Albedo comes with Kaeya, Diluc and Razor on the island because they also received a letter from the Dodo King. When Klee finds Albedo who was on a stroll, she happily runs over to him and calls his name. In the final Midsummer Island Quest, Albedo encourages Klee, who was scared that the Dodo King could be really on the Island, to click on the button that opens the Island.

Kleebedo is a rather popular family ship in the fandom. Although both only had minimal interactions in the Midsummer Island Adventures, the fandom ships this because of their brother-sister relationship in canon, as shown in their voiced lines.

Since both of them have a brother-sister relationship, people dislike it as a het ship. It is also disliked as a het ship because Klee is very young, as it is said in the story quite a few times. However, a small part of the fandom ships KleeBedo as het ship and likes to portray Klee dating/marrying Albedo in the future.

A popular theory is that Albedo takes care of Klee with Kaeya. Kaeya's and Albedo's voicelines imply that they are close and know each other well, and Kaeya is also a Member of the Knights of Favonius, so many people have theorised that Kaeya and Albedo take care of Klee together, since Klee seems to see both of them as older brothers.

Klee and Albedo posts on Tumblr 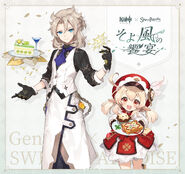 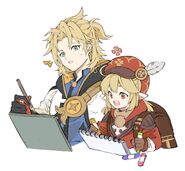 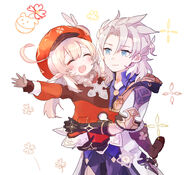 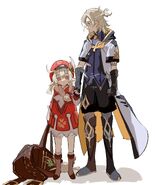 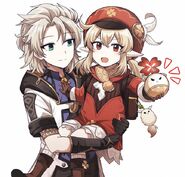