Kleejean is the friendship between Klee and Jean Gunnhildr from the Genshin Impact fandom.

In Klee's Voiceline about Jean, Klee tells that she's the best though she is a little bit scary.

In Klee's Story; Story 3, once Jean has finally lets Klee out of solitary confinement, there will usually be no more explosions than a day or two before the sound of explosions return to Mondstadt. In another story of Klee; Story 4, it was said that Jean was able to defeat a horde of invading hilichurls utilizing Klee's special talents alone.

When the Traveler is going to Jean's office because of Klee, the Traveler sees Klee and Jean, saying that, Klee tells that she turned herself in as her bomb hurt someone, the someone was actually an Abyss Mage and since the Traveler saw everything, the Traveler defended Klee, saying that it was an Abyss Mage who Klee's blew up. So Jean then let Klee to be in the next Ludi Harpastum which made Klee very happy. Though Jean asked Klee where did she hid the treasure, into which, Klee didn't say almost anything, Jean asks again if she was trying to blow up the fishes in Starfell Lake again. Klee tells that she wasn't, but Klee then went to Solitary Confinement as she knew that she did something bad.

In Act 1: Mysterious Islands: Journey to the Unknown, Jean then helped Klee so Klee can find the Golden Apple Archipelago to meet Dodo-King said by Klee. Klee then became excited when Jean approved Klee and help her, Jean tells that she entrusted the works to Kaeya since Jean is leaving, though Jean knew this but she said that she wouldn't able to stop worrying about Klee.

In Act 2: Summer Vacation: Proceed With Caution, when going to the central isle, when trying to wake up Dodo-King, Jean tells Klee that maybe Dodo-King is tired, so Jean then were able to convince Klee that Dodo-King was tired. But Klee tells that this isn't Dodo-King and the real one is somewhere else.

In Act 3: Dodo-King of the Sea: Lying in Wait, when returning again to the central isle, there was a note when defeating the Maguu Kenki, it turned out to be another riddle, but when Paimon said that they already investigated all of the islands but there was nothing interesting, Klee pointed saying that there's a island that was really weird.Jean then asks Klee if she went off by herself without authorization again, into which, Klee apologized saying that she just wanted to go for a walk.

Jean then continued to tell that it's easy to run into danger when by herself, saying that. Jean tells Klee that next time if she wants to go anywhere, tell her first. Saying that she will go with Klee. Though Klee asks Jean if she really mean it as Klee thought that Jean is usually busy with other things such as work. Jean said of course. Paimon tells if she wouldn't known better, she would've think that Jean is Klee's mother.

When going to the island, thinking that Dodo-King was there, Klee then ran when looking for the devices, which made Jean ran as well telling her to walk and not run, probably to avoid any dangers that lies ahead. When trying to do the riddle, Klee told Razor to go fish blasting together, Razor then agree except, Jean. Klee asks if Jean will come too, as Jean said if Klee wants to go anywhere, she must tell her. Surprisingly, Jean actually accepted it, the fact that Jean doesn't let Klee go fish blasting, this was the only time that Jean accepts it. Paimon did became surprised when Jean accepted it.

“Jean would make sure Klee never sees the light of day again. That's what Jean said, Kaeya told me.”
— Klee's Voiceline; Something to Share

“Master Jean is the best! But she's also a little bit scary.”
— Klee's Voiceline about Jean

“Aw yeah, I improved again! But as Jean says, "Continuous self-improvement is one's duty." She says that means I'm allowed to be a bit happy about it, but not the most happy I've ever been in my whole life about it.”
— Klee's Voiceline; Feeling about Ascension: Building Up

“Though it may be said that it is in a child's nature to play, the things Klee plays with are far from toys. I can never take my eyes off her.”
— Jean's Voiceline about Klee

Kleejean is a popular friendship within the Genshin Impact fandom, the two have severally together in fan arts, fanfictions, comics and such more. Though it's quite controversial when Kleejean is treated like a femslash ship as Klee's appearance is seen as a young little girl.

There are lots of memes between the two, such as Jean chasing Klee or Klee getting out of Solitary Confinements without letting Jean's permission. Such more, there was also an official ad from MiHoYo that included Jean chasing Klee.

A lot of people in the fandom has also thought that Jean was Klee's mother as well though it isn't as Klee's real mother is Alice, people tend to think that Jean just acts like a mother to Klee only. 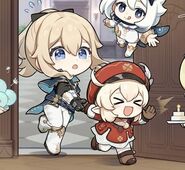