KleeQiqi is the friendship between Klee and Qiqi from the Genshin Impact fandom.

Klee and Qiqi have never canonically interacted as the two are from different nations, making it a very unlikely chance for them to meet. Even though they have not interacted, MiHoYo has posted on their Official Twitter Account, 2 times Klee and Qiqi art, one time Diona was also featured. One of the art's is a fan-made art that was picked out for Paimon's 3 favourite Artwork's from the Genshin Impact Halloween art contest, Klee and Qiqi Halloween Art and a Artwork to celebrate the Official Children's day on which Diona is also featured, Official Children's Day Art.

Klee and Qiqi, have very different personalities. Qiqi is quiet, serious, and polite. Often speaking in quiet and lethargy tone. Klee's personality on the other hand is the definition of a Child's one. She's very curious and is sometimes making trouble for her family, the Knights of Favonius. Klee's voice is very high pitched and she's usually rambling.

A similarity between the two is that both are described as "cute" or "adorable". Most likely because of Qiqi's and Klee's child-like looking and cute designs. Some also find the way both are walking in the game to be cute. Both Klee and Qiqi also have some similarities in how they are dressed, both wear a dress, with a short trouser and stockings. Both have a liking for a certain thing, Qiqi is quite fond of coconut milk, which she calls "cocogaot" milk. Klee adores anything that can blow up like her bombs, Klee is usually going around throwing bombs and if not, she's spending her time trying to make more and better bombs.

The ship is widely disliked as femslash ship, because of Qiqi's and Klee's young appearance, the two are most likely children even though Qiqi is thousands of years old, she is mentally and physically a child. While being not popular as femslash ship, the ship is quite popular as friendship or family ship. Countless of fan art have been created about the two girls, often Diona is also featured on artworks with Qiqi and Klee. Many refer to the chibi characters (Klee, Qiqi, Diona, Sayu and Yaoyao) as "Chibi Squad", because of the girl's young appearance. 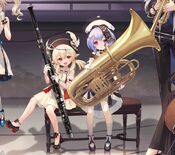 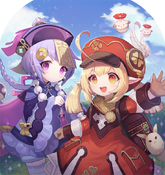 Chibi Squad refers to the ship between the two, Diona, Sayu and Yaoyao