KleeZor is the friendship ship between Razor and Klee from the Genshin Impact fandom.

Klee and Razor know each other and appear to be Good friends with each other.

Razor first mentiones Klee in his Story Quest. He and Klee have met each other before, as he mentiones her as Knight that is "Red and Hot" that helped him before and that "she" was here and set the whole forest on fire and the wild boars were all gone. In the end, when Razor say's goodbye to Amber and the Traveler. He say's "Goodbye Traveler and other red girl". He seemingly refers to Amber as "other red girl", because the first red girl he knew was Klee.

In Act 3, Razor comes with Diluc, Albedo and Kaeya Alberich on the Island, because they also received a letter from the Dodo King. When the group (Jean, Barbara, Klee, Traveler, Kaeya, Diluc and Albedo) searchs for Razor, who runned off somewhere, after arriving on the Island. They find him on the Island were the Maguu Kenki is. Klee then shouts Razor's name. Razor notices Klee and everyone else and say's hello and that he's here to everyone. Later in the Quest, Klee and Razor agree to catch some fishes to eat.

In Act 4, Razor gives Klee courage when she's worried to click on the button that opens the bubble, that surrounds the island, because she thinks that the Dodo King could be really on the Island. Razor say's to Klee that she should go and that he's here for her.

Both Klee and Razor have a Voiceline about each other:

In Razor's Voiceline about Klee, he say's that Klee is a friend but that she also is a big "hassle".

In Klee's Voiceline about Razor, she say's that Razor is one of her best buddies and that whenever a disaster happens, Razor always know's the best way to fix it and that he always keeps Klee safe. But that most of time she is the one who caused the disaster.

In Razor's story 5 that you can unlock on a certain friendship level with Razor. Razor tells how he first met Klee. He tells that one day he met a bright red, 'burny' girl. Razor and the girl stood in the wind together and got soaked in the rain. The girl even rolled together with Razor around in the Wolfhook bushes. When Razor played with the girl named "Klee", it was for him like being a wolf pup (wolf pup is basically a child/young wolf) again.

“Razor's one of my best buddies! Whenever a disaster happens, he always knows the best way to fix it and helps keep Klee safe. Um, but most of the time I'm the one who caused the disaster...”
— Klee's Voiceline about Razor

“Until one day, Razor met a bright-red, 'burny' girl. They stood in the wind together, got soaked in the rain together — she even rolled around in Wolfhook bushes with him. Her name was Klee. When Razor played with her, it was like being a wolf pup again.”
— Part of Razor's Story 5

KleeZor is a very popular friendship within the Genshin Impact fandom, because of Razor and Klee's good friendships. Razor is often portrayed to be one of Klee's bigger brothers, in fan arts and fanfictions. Likely, because Razor and Klee's relationship in canon is somewhat similar to a brother-sister relationship. The ship is widely disliked as het ship, because Klee is widely seen as a child by the Genshin Impact fandom, so people prefer to ship her platonically with other characters. The ship currently has 24 gen fanfictions on AO3. 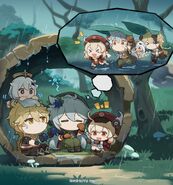