Knuxikal is the het ship between Knuckles and Tikal from the Sonic the Hedgehog fandom.

Tikal makes her debut in Sonic Adventure. Knuckles first saw Tikal in the form of a spirit when she and Chaos were released from the Master Emerald. She later showed the red echidna a vision of when she tried and failed to convince her father not to attack others. The last time they are seen together is at the end of the game, where Tikal thanked him, Sonic, and Tails for calming Chaos down. The young orange echidna and Chaos are then seen returning home in front of the trio.

Knuckles and Tikal are playable in Sonic Adventure 2: Battle, but the latter never appeared in the main game; as well as in the now-discontinued Sonic Runners mobile game. Both echidnas also also appear in the Sonic Rivals series, though the latter in collectible cards. They are unlockable characters in Sonic Forces: Speed Battle in Common and Super Rare rarities, respectively.

In the Mario & Sonic series, Knuckles is a competitor, and while Tikal doesn't physically appear, London 2012 and Sochi 2014 has both as unlockable costumes for your Mii character. Super Smash Bros. Brawl has them as stickers that Sonic can equip for an attack boost.

Most of their meetings were almost the same as in Sonic Adventure.

At the end of "The Adventures of Knuckles and Hawk", the red Chaos Emerald reacts and Knuckles gets teleported to the Master Emerald shrine, which he hears a voice speaking the first lines of Tikal's prayer and then teleports him back to the boat.

In "Heads Up, Tails!", Knuckles was transported back in time once again after successfully finding the last piece of the Master Emerald in the Egg Carrier. The red echidna sees fire around him, then of Tikal and two Chao on the ground, which he runs toward. Knuckles asks if she is okay, in which she replies that she tried her best to stop her father and the other echidnas. Both then see the Master Emerald in the shrine react, and Tikal runs to it, right after the red echidna asks of her identity. As Knuckles follows and tells her to come back, a bright light ends the flashback and he is back at the Egg Carrier, contemplating about the visions he is seeing.

In "Flood Fight", Knuckles, along the rest of the main characters, walks to Sonic (who was beside Tikal) with Chaos Emeralds in hand. They later witness her and Chaos ascending to their home.

In the comics, Tikal asks for Knuckles' help in defending the city against a swarm of Dark Chao.

In issue 179, a violet blur which later forms into Tikal transports Sonic back in time, being witnessed by Knuckles and Porker Lewis.

Knuckles and Tikal suit each other well for several reasons:

If Tikal were to be revived back into physical form, her spiritual powers will be lost (along with immortality), meaning that she can age alongside Knuckles and not cause any issues of her outliving the red echidna. Most fans overlook this as it is only her spirit form that has the power to be immortal; if she were to be brought back to life then she would lose that.

There are eighteen works of the pairing on AO3 as of May 2022 and over ten works on FF.net. Almost half do not center around the pairing but are included with a few focusing on their relationship. On Wattpad there are not many works but do have opinion polls on what others think about the couple.

On DeviantArt it has over 500+ works with a few collections, although the results may be substantially higher due to many not inputting tags to them. The most prominent is KnucklesXTikal-Club and ST-knuxtikal1, both totaling over 300 members as of May 2022. On Pinterest there are over 100 works solely on the couple outside Deviantart, with many more available on other websites from foreign artists. On Youtube there are videos on the couple with several thousand views, and Instagram has a #knuxikal tag with over 100 posts.

Some fans think Knuckles and Tikal are related by the same ancestor and father, respectively, but there has been no evidence to prove they are directly related. In fact, the game continuity and comics such as Archie and StC do not reference both as being from the same family tree at all since Tikal was never stated to have siblings, cousins, aunts or uncles. It is also impossible to assume she was pregnant before being sealed into the Master Emerald as she was too young to bear children. In Sonic Chronicles: The Dark Brotherhood the character Shade refers to Tikal as Knuckles' somewhat distant aunt, but because the game is not considered canon the statement is invalid. As to date the two are not related due to the canon continuity not explicitly stating they are, most likely Knuckles' ancestors being part of the same tribe but from a different family. 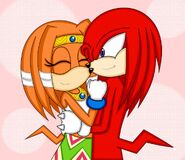