Knuxouge is the het ship between Knuckles and Rouge from the Sonic the Hedgehog fandom.

While it was never shown how the two met, in their first appearance together (and Rouge's first appearance in general) in Sonic Adventure 2, they were fighting over the Master Emerald. During their fight, Dr. Eggman stole the Emerald. Knuckles broke it in order to avoid the doctor from utilizing its power. The incident angered Rouge and tortured Knuckles for the act. The two decided to search for the Master Emerald shards on their own.

They fought each other on their next meeting. Following the battle, Rouge fell, and Knuckles saved her. Rouge got angry, claiming Knuckles only saved her to hold her hand, which Knuckles denied. Rouge then gave him the Master Emerald shards she had found, claiming that they stunk like echidnas, which made Knuckles wonder why she even went after the Master Emerald in the first place.

The two later teamed up with Sonic, Tails, Eggman, Amy and later Shadow to save the Space Colony ARK from falling.

In Sonic Heroes, their teams encountered in Lost Jungle and ended up in a fight as both were trying to defeat Eggman first. Later, when Metal Sonic grew stronger, the teams (along with Team Rose and Chaotix) teamed up to defeat him. After the battle was over, Rouge mentioned getting treasure and left, after which Knuckles ran after her.

The two teamed up in Sonic Rivals 2 in order to find the Master Emerald.

The two were among the guests to attend Sonic's birthday party in Sonic Generations. Before the Time Eater attacked, Knuckles and Rouge were seen talking to each other with chili dogs on their hands.

Some details can be found on the Rougamy page.

Throughout the show, there are many iconic moments where Rouge hits on Knuckles. It's hinted in the episode "The Volcanic Venture" that Knuckles may have returned feelings, since when Rouge went to look for Chris, he smiles shyly at her and waves goodbye. This can indicate that because they were alone, he didn't have to hide his feelings from her, due to embarrassment. It's also hinted when Rouge asks Knuckles about his feelings, and he turns away and denies it.

Knuxouge is an extremely popular ship. Its most notable rival ships include Shadouge (for Rouge) and Knuxikal (for Knuckles). On AO3, it is the most written ship for Rouge and the second most written for Knuckles, the latter behind Sonuckles.

It is most of the time shipped alongside Sonamy, Shadaria, or Silvaze. This ship has gone up in popularity since the Sonic X fandom came to life. This is most popular towards the Pre-Super Genesis Wave Archie comics and Sonic X fans because of canon romance in both. There are some extremely competitive ship wars against Shadouge because of it's popularity.

Rouge: “I don't believe those monster stories.”
Knuckles: “I'd love to meet monsters down here. I could challenge 'em to a fight! I'd destroy 'em all!”
Rouge: “You know, you're kinda cute when you talk about how tough you are.”
Knuckles: “You know, I can't stand you?!”
Rouge: “I'm not surprised. There's a very thin line between hate and love.”
Knuckles: “Well, you make it thicker!”
Tails: “Could you two take it easy, please? We've got enough turbulence up here.”
— Sonic X episode 48; "The Volcanic Venture"

Rouge: “Well, what do ya know? I guess neither of us knows very much about how those time warps work.”
Knuckles: “You look awful!” (laughs)
Rouge: “Oh yeah?!" (knocks Knuckles down)
Knuckles: “Stop! That tickles!”
Rouge: “Didn't I warn you to behave?”
Knuckles: “Alright, alright!”
— Sonic X episode 52; "A New Start"

Knuxouge on the Sonic the Hedgehog! Amino 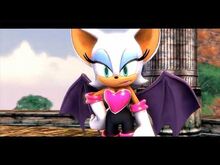 Knuckles and Rouge - I Hate Everything About You

Knuxouge- My Life Would Suck Without You

Knouge- What makes you beautiful

Knuckles and rouge ~ call me maybe

Rouge's Skater Boy, Knuckles. Amy could have had him.

Knuckles and Rouge - Fly On The Wall

Knuckles and rouge-we are in love

Knuckles and Rouge Bring Me To Life

Knuckles and Rouge Love the Way you Lie

Knouge ~ If We Ever Meet Again ♥

Knouge - Shut up and kiss me

Knouge-When I get that feeling

I Knew You Were Trouble - Knuxouge - Taylor Swift

KnuxRouge- To the Moon and Back

Knuckles and rouge ~ i need your love

Knuxouge Does your mother know? **REQUEST**

Knuckles and Rouge - She Wolf

Knuckles x Rouge ~Not fair~
Add a photo to this gallery

Retrieved from "https://shipping.fandom.com/wiki/Knuxouge?oldid=258407"
Community content is available under CC-BY-SA unless otherwise noted.