Knuxulie is the het ship between Knuckles and Julie-Su from the Sonic the Hedgehog fandom.

Knuckles and Julie-Su were echidnas from rival clans, as Julie-Su was part of the Dark Legion and Knuckles was part of the Brotherhood of Guardians. Julie-Su, along with the other members of the Dark Legion, were trapped in the Twilight Zone, but were released from it as a result of Dr. Robotnik firing the ultimate annihilator. During this event, the Dark Legion had a clash with Knuckles and the Chaotix. Julie-Su caught a glimpse of Knuckles and was intrigued for a reason unknown to her. She followed him and the two had a brief fight. During this fight, Julie's hood was pulled off, and Knuckles was surprised to find out she was a girl. The fight was then intervened by Archimedes, who asked why Julie-Su was there. When Julie-Su was unable to explain the reason, Archimedes suspected a Soultouch.

Having similar personalities, the two had clashes. However, with the sudden reappearance of Echidnaopolis and a conflict between the echidnas and dingoes, the traditional enemies of the echidnas, the two teamed up in order to deal with the situation. After the dingoes were defeated and Echidnaopolis was restored to Angel Island, the two echidnas developed an awkward friendship. The two then visited Mobotropolis, where Knuckles introduced Julie-Su to the Freedom Fighters. However, not long afterwards, Enerjak attacked, seemingly killing Knuckles. Julie-Su returned to the Dark Legion, and told Kragok she had only stayed with Knuckles for convenience, but she felt out of place. After some time, Julie-Su betrayed the Dark Legion, and joined the Chaotix, a group of which Knuckles was also a member.

Some time later, Knuckles was upset after finding out his mother was engaged to Wynmacher. Julie-Su went to comfort him and gave him a kiss on the cheek, which the two strangely appreciated. Julie-Su claimed that this was simply to return a favor after Knuckles had tried to cheer her up, and two agreed to never do it again, but secretly, Julie-Su thought they would kiss again.

Both of them were members of the Chaotix and sometimes went on missions together. However, they were separated by Thrash the Devil, who brought most of the echidnas into an alternate realm.

It is likely that Knuckles and Julie-Su would have ended up together if it hadn't been for the Super Genesis Wave as a statue of their daughter Lara-Su is seen 200 years in the future.

In this alternate future timeline, Knuckles and Julie-Su live together but are not officially married.

Daughter of Knuckles and Julie-Su in the alternate timeline. Her name is a portmanteau of Knuckles' mother Lara-Le and her own mother's names.

In the unaltered timeline, she initially wanted to be a Guardian like her father.

This pairing is mostly shipped by fans of the Pre-Super Genesis Wave Archie comics. It is among the popular pairings for Knuckles, though pairings involving Knuckles and a game character, mainly Knuxouge and Knuxikal, are more popular.

It is the most popular ship for Julie-Su. Some fans who dislike the ship but don't want to exclude Julie-Su ship her with other characters, but none of these ships are as popular as Knuxulie.

Some fans dislike the pairing due to it being incest, as they are fourth cousins 12-times removed (the large generation gap is due to Julie-Su's family coming from the Twilight Zone where one unit of time passed for every four units of time on Mobius). However, their relation is distant enough for the pairing to be considered acceptable. 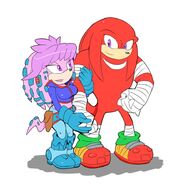 by Cylent-Nite
Add a photo to this gallery

Retrieved from "https://shipping.fandom.com/wiki/Knuxulie?oldid=258717"
Community content is available under CC-BY-SA unless otherwise noted.