Never Met; both are dead

Kokichiro is the slash ship between Chihiro Fujisaki and Kokichi Oma from the Danganronpa fandom.

Chihiro and Kokichi have never canonically interacted, as they both come from two different entries in the series.

Even though Chihiro can be seen as one of the kindest characters in Danganronpa, he unfortunately had a deep-rooted complex over being looked down on by others as being "weak". This happened due to his experiences from his childhood where he was bullied quite a lot. To make the bullying stop, he started disguising himself as a girl to avoid the pressure of having to become stronger. However, this only made his insecurities even worse. Though he tried to hide it, he still got uncomfortable when others treated him as a girl, and he would rather spend time with other boys instead of girls. Chihiro wishes to be strong so that he can protect others.

Kokichi, on the other hand, is almost completely the opposite. He is very mischievous, and he enjoys playing pranks and teasing others, sometimes in quite mean-spirited ways. He appears to crave attention, as he gets irritated when people talk over him or don't react to his antics in the way he wants them to. He also appears to be arrogant, considering himself a very important part of the class trials and once claiming that they won't turn out well if he isn't given the chance to speak. Due to this kind of behavior, he is viewed as an antagonistic figure among the group, but this doesn’t seem to stop him from being able to manipulate the class trials in any way.

Personality-wise, the two are very different.

Kokichiro is largely unknown (and thus largely unpopular) in the fandom, due to the two never canonically interacting. Because of the fact that this ship is largely unknown it gets easily overshadowed by the popular ships: Chimondo for Chihiro and Saiouma and Oumota for Kokichi. Nonetheless, it does have some supporters.

The ship sailed mainly due to the characters' contrasting personalities. Fans believe that Chihiro's kindness could rub off on Kokichi, if only by a little, and that Kokichi would be able to teach Chihiro to become less shy and more tough. 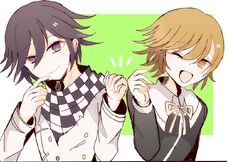 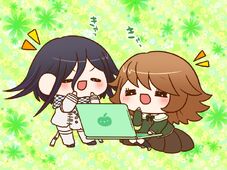 Oumasakinami refers to the ship between the two and Chiaki Nanami