Kokoyae is the femslash ship between Yae Miko and Sangonomiya Kokomi from the Genshin Impact fandom.

Yae Miko and Kokomi currently only have a few interactions, however both have an voiceline about the other. In Miko's voiceline about Kokomi, she starts off saying Kokomi is getting cuter every generation, then wondering how she looks performing the dance of divine peace. She also lastly says she’s be happy to share a few tips with Kokomi if she asked nicely. And then in Kokomi's voiceline about Yae Miko, she says she holds her as an outstanding shrine maiden, then saying she's heard that Yae holds responsibility with Yae Publishing House's light novels. Kokomi then calls her an enigmatic individual.

The two also share many similarities. Plus have similar color schemes. Firstly, both seem to like teasing Gorou, or just know him well. Both are also high ranks within Inazuma. And both of them are shrine priestesses.

In their first interaction, Miko says Kokomi looks as soft as a jellyfish, and Kokomi says it’s nice to meet her, calling her “fried tofu with all the frills”. Miko then gives her a nickname, which is “sole of the deep”, and the two begin laughing. Miko then says she’s there for a book review with Kokomi, and suggests they go to the Kanjou Commission headquarters. However, seconds later she says it’s just their first meeting and decides they shouldn't announce it to the public yet. After, Yae asks Kokomi where Gorou is, and after her response, Kokomi leaves to talk with the Traveler.

“These Divine Priestesses seem to be getting cuter every generation. I wonder how she looks performing the Dance of Divine Peace... Perhaps even little schools of fish swish around her while she spins. If she's ever looking for a more experienced head shrine maiden to learn from, I'd be quite happy to share a few tips with her... Hehe, as long as she asked me nicely, of course.”
— Yae Miko about Kokomi

“I have also heard of Guuji Yae's great deeds. In all fairness, I hold her to be an outstanding shrine maiden, and she has performed her duties marvelously. I even heard that she holds responsibility where Yae Publishing House's light novels are concerned. An enigmatic individual to say the least...”
— Kokomi about Yae Miko

Kokoyae is very unpopular, but is slowly growing. Rival ships are KokoSara, Kokorou, Yaeyato and EiMiko. Kokoyae currently has 21+ works on AO3. This ship is usually liked due to their matching colors. Sometimes the two may also even be shipped alongside Raiden Ei, or Gorou.

This ship mostly sailed due to Yae's voiceline about Kokomi where she calls her cute and says she wants to see her performing the Dance of Divine Peace. Fans started shipping these two when Yae's voiceline was leaked

KokoEiMiko refers to the ship between Raiden Ei, Yae and Sangonomiya 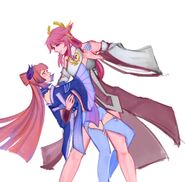 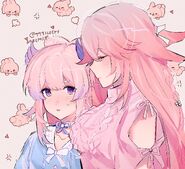 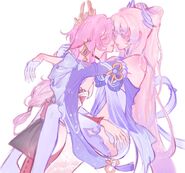 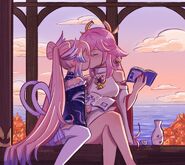