Koliveith is the slash ship between Keith and Kolivan from the Voltron: Legendary Defender fandom.

Team Voltron travel to the Blade of Marmora base with the coordinates given by (former) fellow Blade member, Ulaz. Shiro and Keith take the Red Lion to the base. The two arrive and are greeted by two Blades. All four descend to where the other Blades are. Once in, Kolivan, the leader, addresses them. One of the other Blades forcibly takes Keith’s knife and Kolivan asks Shiro if he can corroborate Keith's story, of the knife belonging to him. Shiro realizes that if the Blades aren’t interested in forming an alliance, then he and Keith should leave. Keith is adamant that he must know how the knife ended up in his possession on Earth. If Keith seeks knowledge, Kolivan tells him he can do the Trials of Marmora, a physical and psychological test that pushes him to his limits. Should he survive, its secrets will be relieved. Shiro tries again to get him and Keith out of there, but Keith won’t budge. Keith is given his knife back and the trial begins soon after. Through Keith's trial, Kolivan watches.

Keith reaches his limit and the Red Lion begins attacking the base, knowing Keith is in mortal danger. Kolivan tells Shiro and Keith to stop and that they’re not leaving with the knife, as Keith failed to awaken it. As Shiro and another Blade agent begin to fight, Keith yells, “Wait! Just take the knife!” He goes on saying he knows where he comes from and that they need to work together in order to defeat Zarkon. Just then, his knife glows and it becomes a sword. With the his knife now awoken, Kolivan, Keith and Shiro all head back the castleship to officially confirm Team Voltron and The Blade of Marmora's alliance.

The new allies are close to executing their plan to defeat Zarkon. Blade member Thace isn't checking in with the Blades, which as them uneasy of the mission. At hearing this, Keith says he'll infiltrate the Zarkon's base. Kolivan doesn't like that plan as Keith is so inexperienced. Keith argues back that he's doing it.

Keith is now a full-fledged Blade of Marmora member. Keith, Kolivan and Regis are on a mission. Once Kolivan gives the orders he sends Keith and Regis off. Before Keith can leave, Kolivan makes sure Keith understands this is intelligence gathering, and one for Keith not to “engage” in. Keith is soon spotted by a droid and before he kill it quietly, it fires from above, alerting anyone of Keith’s position. Kolivan tells them it's a “hard out.” When Keith realizes Regis isn't back, he immediately runs out to save him, once he does, throwing them both into the pod Kolivan is already in. Kolivan tells Keith how he broke protocol, going even further by saying, “You didn't consider that something could have happened to you, that would make two men down, instead of one.”

Later on, during another mission, the ship they're on is a decoy and rigged to explored. Kolivan grabs Keith and runs, leaving Regis behind. He's jetted out in open space, knowing Regis is dead; Keith calls out for only Kolivan. Getting no answer, he makes his way to the ship they came in, crashing inside. Kolivan is there and only looks down at Keith on the ground.

Kolivan and Keith are standing next to each other as they discuss over video communication with Team Voltron on what do to for the Coalition. Soon later, Kolivan and Keith work along with other Blades to overtake a Galran ship to assistant in rebel fighters.

Kolivan and Keith are asking if there's anyone asking for help in the fight against the Galra Empire. Coran says there's no one, other than noticing a Galra ship stopped far away from where Voltron is located. Kolivan chimes in perhaps it “knows it can't fight back, as the planet is too well fortified.” Keith doesn’t buy it as it's not the Galra way - “victory or death” - immediately he realizes it's Voltron. He soon leaves with a Galran battle cruiser.

Kolivan explains to Keith they need to extract a Blade member named Krolia as well as destroy a super weapon created by Galra forces; which Keith will do on his own. Following Keith's actions from the previous episode - “Kral Zera” - Kolivan wants to him to know that he cannot allow his feelings to cloud his judgment. Keith is quick to defend himself, but Kolivan is quicker to, “You have in the past. Remember: the mission is the only thing that matters. Emotions are a luxury we cannot afford.”

A distress signal comes from a barren planet. Krolia determines it to be a signal that not many Blade of Marmora agent know of, deeming it to be a senior member. Keith questions if it’s Kolivan.

Once on the planet, they come across a survivor named Macidus. As Macidus is speaking, Krolia notices a wall with knives belonging to other Blades. Krolia draws her gun on Macidus, demanding to know why he has them. The Macidus explains how he sent out the signal and the battle that ensued two years prior, the knives being a way to remember. Krolia picks up Kolivan’s blade. As she holds the blade, it starts to flicker. Seeing this, Krolia comments how a Blade’s life force is connected to their knife, deeming Kolivan to still be alive. Macidus slowly stands up, mentioning, “Just barley.”

Macidus reveals his true intentions by using Kolivan to draw in any remaining Blade of Marmoa agents. As he teleports away, he drops a device that freezes the paladins in place. Just before Keith can be frozen, his wolf teleports themselves away. Soon, Keith and Macidus, revealed to be the druid he fought long ago, are engaged in an intense fight. As they teleport, Keith ends up in the room where Kolivan is being strung up. Keith sees this, and says he’s going to get him out of here. Once everyone is unfrozen by Allura’s Altean alchemy, Keith goes for Kolivan.

Keith has since returned to Earth. It’s after an intense battle that he’s hospital bound. Following Kolivan’s mission with Krolia reforming the Blade of Marmora, Keith is resting and slowly waking up, Kolivan is seen sitting on the window ledge, smiling upon seeing Keith as he opens his eyes.

ABO (Alpha, Beta, Omega) is the most frequent in fan works. As Kolivan is a full-fledged Galra and Keith is half-Galra this dynamic is increasingly popular where they become each other’s mates, or simply help each other in intimate, none-platonic ways. Kolivan is always portrayed as an Alpha, while Keith differs, he's usually an omega.

Less “friendship” and more “family.” Those who don’t view them romantically see Kolivan as a father-figure to Keith. In season 5, with the introduction of Krolia, Keith’s mother, her and Kolivan’s ship Krolivan has become an enjoyed side-paring. The idea of the three of them as a little family is a popular head-canon.

Even without Krolia, Keith and Kolivan’s relationship has been around since season 2. AUs have come to be with Keith being born or brought in at a younger age into the Blade of Marmora, with Kolivan and the rest of Blades raising him. 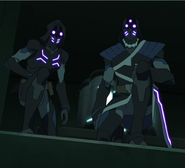 Retrieved from "https://shipping.fandom.com/wiki/Koliveith?oldid=129671"
Community content is available under CC-BY-SA unless otherwise noted.