Komaegi is the slash ship between Nagito Komaeda and Makoto Naegi from the Danganronpa fandom.

Nagito idolizes Makoto due to him being the Ultimate Hope, calling him a "hero" and "the symbol of hope" in Another Episode.

It is possible that Makoto defeating Junko Enoshima has affected Nagito's way of thinking, as in Another Episode he appears to have more belief in talentless people and he also respects Makoto's talent as the Ultimate Lucky Student, despite appearing condescending towards his own talent which is the same.

in Super Danganronpa 2.5: Komaeda Nagito to Sekai no Hakaimono, Nagito is shown to have a glorified view of Makoto as seen in the way the dream word shows him as a confident charming ladies man, as contrast to the real Makoto's awkwardness and lack of self confidence

When the two meet outside the Future Foundation headquarters, Nagito gushes to Makoto about how wonderful he is, and even says that Makoto's luck might be greater than his own. He takes Makoto's hand and looks at him intently, but he is quickly carried away by Nekomaru Nidai and Akane Owari. He tells Makoto that hopefully they'll meet again. In the English dub, he marvels how soft Makoto's hands were, especially when compared to his own sticky hands.

In the canon timeline Nagito clearly sees Makoto's luck as far greater than his own, however interestingly in Ultimate Talent Development Plan, Makoto says that he feels that Nagito's luck is better than his own.

As a character, Nagito is a darker parallel to Makoto and was originally supposed to look even more like him.

In Danganronpa S, when Makoto thinks about the potiental of his talent, being the ultimate lucky student. He says that maybe he should go talk to another lucky student, which is Nagito. Makoto firsts apologizes to Nagito as he had no idea that he was sick. But Nagito was okay with it and instead said that he should be the one to apologize instead of him, for making him come out all the way. Nagito asks Makoto what is luck to him, which Makoto answers, "Considering I'm able to be here, I guess luck is all the doors of opportunity opened to me". Nagito finds his answer as a wonderful, optimistic answer, telling that they both may be lucky but for a scum like him. He couldn't even come close. Regardless of Nagito stating that he can reach that glimmer of hope, Makoto says that for him, he's way more impressive as a lucky student than he is.

“Her brother, a hero, the Symbol of Hope.”
— Nagito about Makoto, Komaru's brother, while explaining his motives in Chapter 4 of Ultra Despair Girls.

“Hello, Makoto Naegi! You bear good luck, just like I do... No, a luck that far exceeds my own. I am so lucky to have such a splendid underclassman.”
— Nagito upon meeting Makoto in Hope Arc.

Nagito – “Oh, his hands were so soft”
Hiyoko – “Is it just me, or is he getting creepier with age?”
Makoto – “Why was he sticky”
—After Nagito and Makoto's meeting

“Here I thought luck was the lamest talent, but a person with a different kind of luck... Maybe... Just maybe you can reach that glimmer of hope.”
— Nagito to Makoto during their discussion about their luck

The ship has sailed back when Danganronpa 2 was released, as a result of the two sharing their talent and Nagito idolizing hope, in which Makoto also believed in and which eventually became his changed title.

Nagito's unhealthy obsession with Makoto Naegi and his achievements, which causes him to target Komaru Naegi as a protagonist of his scheme, has led some fans to abandoning the ship. Nonetheless, some fans stayed loyal to the ship. For them, their first interaction on-screen in Hope Arc fueled the ship even more, especially since it portrayed Nagito's obsession with Makoto in a more positive and comedic way. 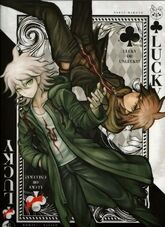 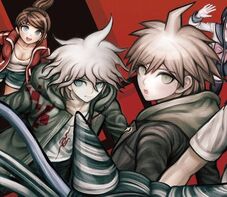 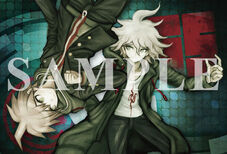 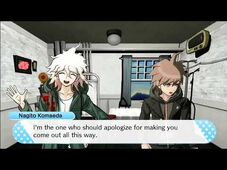