Komahina is the slash ship between Nagito Komaeda and Hajime Hinata from the Danganronpa fandom.

The main reason the ship sailed was because of a line Nagito Komaeda said to Hajime Hinata: "From the bottom of my heart... I am truly in love with the hope that sleeps inside you." This is a partial mistranslation of the original Japanese line, "どうか忘れないで… ボクはキミを…キミの中に眠る希望を心から愛していると。" A closer translation would be "Please don’t forget that I love y-… The hope sleeping inside you… from the bottom of my heart."

A line that Hajime said (in his head) in return was: "In the end, everything Nagito said... I don't know what was true and what was lies. But even so, there might have been a definite truth hidden somewhere in his words... If there wasn't, there's no way I could feel this mysterious bond between Nagito and me."

From the start, Nagito was particularly interested in Hajime and was the only one to stay with him after he lost consciousness at the beginning of the game. He also escorted Hajime while he introduced himself to the others. Nagito noticed that he and Hajime were similar somehow as if they were both bystanders in something that didn't concern them. Hajime also didn't feel like an Ultimate to Nagito and they were both fans of Hope's Peak Academy. Nagito suggested that Hajime's talent could be Ultimate Serenity because even Hajime's mere presence brought him serenity. Though sometimes annoyed by Nagito, Hajime also felt more relaxed around him. Prior to the chapter 1 trial, Hajime was the closest thing Nagito had to a friend.

In his fifth Free Time Event, Nagito reveals a lot of personal things to Hajime, telling him about his terminal diseases and his biggest wish being to be loved for once before he dies. He falsely dismisses what he just said as lies, probably for the sake of Hajime's safety, since Hajime was about to forgive Nagito and he would've been in danger if they got too close due to the effects of Nagito's bad luck. The way that Japanese sentence structure works, of Nagito's last line in particular - starts off as the beginning of a confession, that he decides to rephrase at the last second into him being in love with Hajime's hope instead. Furthermore, his choice of word being “aishiteru” is notable, as it's an incredibly strong way of saying "love" that in real life Japan, even some married couples are hesitant to use.

It is revealed that Nagito's feelings for Hajime are romantic in nature. Several times throughout the story, it's shown that Nagito feels a genuine closeness to Hajime, such as when he claimed he doesn't like being around him and to hurry up and leave when under the influence of the despair disease which forced him to lie. He indicates that the reason he feels this way is because despite knowing what kind of person he is, Hajime still tried to understand him and spent time with him while no one else never did. This is confirmed in the official drama CD, in which Nagito tells Hajime: "I'll continue to do anything in my power to assist you. Because... I like you. I love you, for being willing to talk to me like this, even after knowing what a hopelessly incompetent person I am...".

In Island Mode, Nagito really wants to entertain Hajime during their trips but is paranoid over his safety. He is also often quite nervous due to being inexperienced in many social situations, and supposedly because of his feelings towards Hajime (for example, he enjoys the quiet library with him, only to get very nervous after realizing that the two of them are alone). During his Shot Through The Heart sequence, he is terrified of the idea that Hajime might hate him. After a particularly good outing with Hajime, he refers to the hotel as their "love nest". He also states that he doesn't mind getting naked in case Hajime wants to see that. In the final event, he reveals that his way of thinking has slowly started to change thanks to the time he spent with Hajime. In the ending, Nagito hesitantly asks for Hajime's friendship and Hajime accepts it without much consideration, though he noticed that the wording seemed to start as a love confession and expected more.

In Nagito's character song, Poison -gekiyaku-, he mentions that he loves and wants to understand an ambiguous "him" more than anyone else.

In Super Danganronpa 2.5, it's shown that Nagito's mind created an illusion world as a coping mechanism and he did not wake up from his coma. However, the world lacks counterparts for Hajime, most likely because his emotions concerning him were too powerful. Hajime sent the World Destroyer to erase his mental blocks and right after hearing the alter ego's voice, which is exactly like Hajime's, Nagito had flashbacks and remembered Hajime and his smile. Hajime wished to wake up Nagito from his coma and was worried of him. After Nagito woke up in the real world, he rejoined Hajime in friendly terms. At first, he assumed he was Izuru, but then corrected himself by saying he must be Hajime. Hajime helped him up in the way that resembles their first meeting inside the program. Nagito says he believed in Hajime to wake him up and later he takes Hajime's hand as the class moves aboard, planning to go towards hope—this references Side: Hope and also seems to imply that he considers being with Hajime his hope.

At the end of Danganronpa 3, after helping Makoto and others, Nagito and his classmates decide to go back and live in Jabberwock island. While everyone on the boat is eating, Nagito calls out to Hajime that the food is almost gone and to hurry up. Hajime smiles brightly and runs over to him, and the two of them eat side by side. Even though Hajime earlier explained that he is now both Hajime and Izuru, Nagito continues to call him Hajime. Because of all they have been through, Hajime finally comes to an understanding with Nagito.

In an Otomedia poster, which was released after the anime, Nagito is seen giving Hajime a small bag of fortune cookies as a gift while they are on the ship, presumably after the anime's story. The pink hearts and the text mentioning eating cookies full of hope with "him" (using the Japanese word "kare" [彼] which means "him" or "boyfriend" depending on context), implies that it might be a romantic gesture and that Nagito and Hajime became a couple. In the magazine's interview, Nagito is asked what autumn food reminds him of Hajime. He answers a "chestnut in its burr", comparing it to Hajime's hair, but after being told it's too normal of an answer, he goes on to explain that to properly eat one you have to go through a lot of work. He states that "Not being straightforward… it’s like Hinata-kun, right?". In turn, Hajime answers that Nagito reminds him of "the rice of a new crop" (referring to rice freshly harvested during the fall season) because of Nagito's hair's color. He also mentions that due to Nagito's "poor grip on reality", it's difficult to appoint him to a food with distinct taste.

In Danganronpa V3's bonus mode, Nagito dislikes Hajime at first due to him being a reserve course student. However, in three years, they become friends and Nagito tells Hajime about his luck. During their last Christmas in school, Nagito and Hajime talk alone while the other students are celebrating. Hajime reminds the other boy that the class will definitely keep in touch and see each other again, though Nagito thinks nobody would invite him. Hajime tells him that Chiaki would and he just has to accept her invitation. Nagito asks why Hajime cares about him and still hasn't lost interest in someone like him. Hajime explains that he still doesn't understand Nagito and he refuses to leave it like that. He formally asks Nagito to be his friend and the two shake hands, though Nagito seems to want to hold his hand longer. Nagito wonders if it's going to change anything, but Hajime tells him that maybe like this they could really change something and understand each other some day.

Komahina is one of the most popular ships of the Danganronpa fandom. It has gained a significant amount of fanfiction and as of August 2017, Komahina has the most number of fanfictions on Archive of Our Own. Fans of this ship typically rival the Hinanami ship, and in rare cases the Junkozuru ship.

The canon status of the ship is a highly debated topic within the fandom. Some perceive Nagito and Hinata's relationship as a platonic relationship and some as a one-sided love. On the other hand, many other believe Komahina is canon with implied romantic feelings from both sides. The Wattpad essay, "Why Komahina is the Most Canon/Misinterpreted ship in Dangan Ronpa" by shslsocialnetworker explores the social media reaction to the ship and the arguments for Komahina's canonical status.

The Otomedia poster has gained some controversy in the fandom. A picture of Komahina is captioned with the Japanese word "kare" [彼] which can mean "him" or "boyfriend". Some fans believe that the word "kare" means "boyfriend" and so believe that the poster implies that Komahina are dating. While others are more doubtful regarding the ship's canonical status as the word could mean "him", suggesting the pair are not dating. The Otomedia poster is also not an official game, novel or manga and so the poster may be a non-canon source. 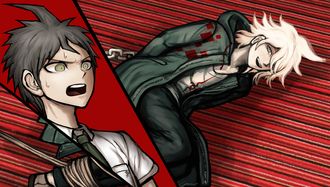 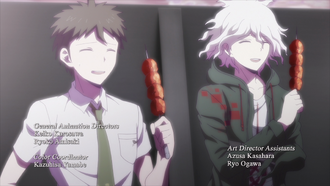 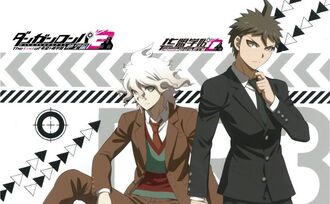 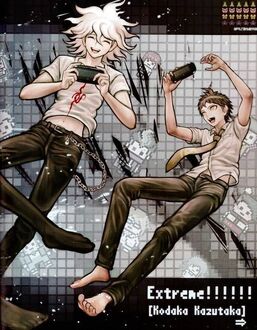 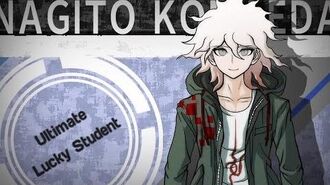 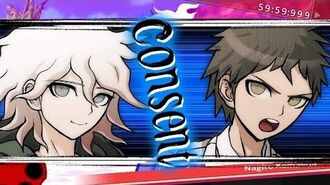 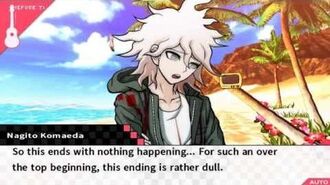 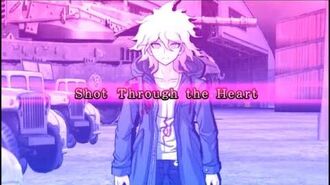 Komahinanami refers to the ship between Komaeda, Hinata and Chiaki Nanami