Komahinanami is the poly ship between Nagito Komaeda, Hajime Hinata, and Chiaki Nanami from the Danganronpa fandom.

We first meet the trio in Danganronpa 2: Goodbye Despair. Nagito immediately becomes the deuteragonist supporting our protagonist, Hajime, by helping him meet everyone else, as well as while investigating the murder. Chiaki also helps and the trio quickly become this game's most useful characters during the investigations and Class Trials. After Nagito's true nature is revealed during the first trial, his relationship with Hajime changes. Nonetheless, in Chapter 2 Hajime and Chiaki investigate together a lot again and Nagito helps them at one point. In Chapter 4, Nagito chooses to explore the Fun House with Chiaki and Kazuichi, also making the latter suspicious of Hajime potentially being the traitor. After Nagito learns the truth that everyone except the traitor is an Ultimate Despair, he prepares a case in which he wants the traitor to survive the trial alone. Not knowing the traitor's identity, he leaves part of his case to luck to decide the culprit, getting Chiaki tricked into unknowingly poisoning him. With that, Hajime is the only member of the trio remaining in Chapter 6, although AI Chiaki reappears in the finale to encourage Hajime.

In Despair Arc, human Chiaki and Hajime's tragic relationship is one of the main plots of the season. The two end up bonding through gaming together. Part of the reason why Hajime wants to go through Izuru Kamukura Project is to become someone he'd be proud of being around Chiaki. Chiaki is also able to recognize Izuru Kamukura as Hajime despite his changed appearance and not seeing him for months. Izuru, Hajime's alter ego, is also moved to tears by her death despite usually being stoic, which also makes him decide to check whether hope or despair is more unpredictable, resulting in Killing School Trip. Meanwhile, Nagito idolizes Chiaki as their class's hope once she's chosen for their class representative. It should also be noted that Chiaki was the most amicable towards Nagito in comparison to the rest of their classmates.

In Hope Arc, Hajime/Izuru and Nagito appear to be best friends while their group is on the ship. Hajime/Izuru also has a vision of Chiaki with whom he chats for a bit.

Like Naegamigiri in Danganronpa: Trigger Happy Havoc, this ship sailed as a result of these three being the main characters of Super Danganronpa 2: Goodbye Despair. Similarly to the previous main trio, they were the most useful characters during investigations and Class Trials and got very important role in the story. Both Nagito and Chiaki having their main interactions with Hajime also helped to fuel the ship more. It is popular with people who can't choose between Komahina, Hinanami, and Komanami.

They're often shown together on promo pictures, sometimes alongside the main trio from Danganronpa 1. 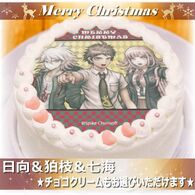 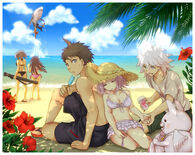 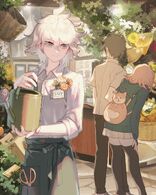 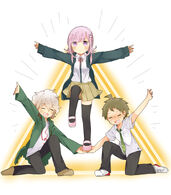