• Opposites Attract — Mahiru is shown to be outgoing and have a negative opinion on the death of others while Nagito is shown to be distant and have a positive opinion on the death of others, as long as it's done for the murderer's hope.
• All Girls Want Bad Boys — Nagito is portrayed as the antagonist and is seen as a crazy and/or dangerous person by his classmates. However, Mahiru is seen as the opposite.
• Hair Contrast Duo — Mahiru's hair is a dark red while Nagito's hair is mostly white.

Komahiru is the het ship between Nagito Komaeda and Mahiru Koizumi from the Danganronpa fandom.

Both Nagito and Mahiru are part of Class 77-B and are featured in Danganronpa 2: Goodbye Despair as well as Danganronpa 3: The End of Hope’s Peak Academy.

In Danganronpa 2: Goodbye Despair, Mahiru and Nagito seem to care for one another.  During the Prologue, Mahiru states that Nagito is more tolerable that the other “weirdos” she had previously met around the island.  In Chapter 1, after Nagito had been picked for cleaning duty, he tells the others that they can leave it to him, as he is pretty good at cleaning. Mahiru then tells him that he'd make a good stay-at-home dad, in which Nagito takes as a compliment.

In Chapter 2, when Kazuichi and Nekomaru tied up Nagito in the Old Lodge, Mahiru showed concern for his well-being and attempted to feed him breakfast, in which Nagito had pressured her to play Twilight Syndrome Murder Case. After receiving the prize for beating the game from Fuyuhiko, she finally decided to play the game, which was revealed to be an essential part of her death later on.

In the class trials, specifically the first class trial of the game, Nagito and Mahiru are shown to be helpful assets to the discussion. However, Mahiru is shown to be quite annoyed at Nagito's behavior after revealing his true colors during the first trial, and much of Chapter 2.

In Danganronpa 3: The End of Hope’s Peak Academy, although the two do not have many interactions, they don’t seem to be on bad terms.  In episode 7, Mahiru informed her good friend Hiyoko Saionji that Nagito wasn’t dead, but was just suspended, after Hiyoko had placed a flower on Nagito’s desk to commemorate his “death", showing her concern for the misinformation about him. Later, they were both brainwashed into despair by the death of Chiaki Nanami and became a part of Ultimate Despair.

The ship sailed as a result of their interactions with one another, which was mostly portrayed in Chapter 2 of Goodbye Despair.  This ship is considered a rare-pair in the fandom, due to the few interactions that they had in both the game and anime.

The ship is also overshadowed by other ships, such as Komahina and Soapies, due to the fact that many people see Mahiru as one who is attracted to girls and Nagito as one who is attracted to boys. However, with Mahiru's friendly and positive attitude, fans of the ship could see Mahiru helping Nagito with his self-esteem issues. It is mostly seen as a healthy ship for both. 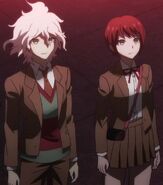