Komamiki is the het ship between Nagito Komaeda and Mikan Tsumiki from the Danganronpa fandom.

The reason people ship this is because at first, Nagito worries about Mikan, as he scolds Hajime after thinking he bullied her and asks if she's okay after having one of her many exaggerated falls. He is also very humbled during the first trial when he mistakenly assumed that Mikan complimented his appearance when she pointed out that there wasn't any blood on him.

After Nagito caught the Despair Disease, Mikan took care of him along with the others. However, she also caught the disease, and despite his terrible condition, he noticed that she had fallen into despair. Because of this, and the murders she committed for the sake of despair, Nagito lost all respect for her and considered her an enemy, worthy of the name "Ultimate Despair". Unlike the others, he wasn't fooled by her actions during the trial and he bitterly refused to forgive her. However, Mikan told Nagito that he's wrong and claimed that she had killed for "her beloved". Somewhat mockingly, she said that Nagito doesn't understand because he doesn't have anyone to love and isn't accepted by anyone. This left Nagito at a loss for words.

Later though, after Nagito and Mikan awaken from their comatose state, he doesn't seem to hold any more hatred towards her. This probably means that Nagito's original relationship with Mikan, which was mostly him not paying attention to her, although thinking her talent is amazing, has returned.

In Nagito's free time events, he used "Meeting a nice nurse after getting into a car crash" to explain his luck cycle. However, it's not confirmed that he was actually talking about Mikan as the nurse in this case is most likely hypothetical. It's important to note, however, that while Nagito refers to the nurse as "her" in the English version, he uses the word 看護士 (kangoshi) for "nurse" in the Japanese version, indicating that the nurse is male.

In the Hope arc of Danganronpa 3, when Mikan tried to talk to Makoto, Nagito moved her out of the way to talk to Makoto himself, having his full attention on Makoto and therefore not paying attention to his surroundings. As a result, he bumped into Mikan, making her fall, which sent Ibuki to chase after her.

In Danganronpa S: Ultimate Summer Camp, Nagito reassures Mikan when she worries that Monaca hates her, saying that it is likely because of her medical knowledge. He assures her that she hasn't done anything wrong and advises her not to push too hard.

Mikan – “Uhhhh...my mind is drawing a blank...from nervousness...And...I went through all the trouble preparing 5,000 different topics to discuss after introductions!”
Nagito – “It's okay if you take your time and remember slowly. We'll wait as long as it takes. We'll wait for you forever if that's what it takes.”
— Nagito being patient with Mikan while he is introducing Hajime to her in Danganronpa 2.

Mikan – “Well...Even if that's true, I feel Nagito looks...you know...clean...”
Nagito – “Nobody's ever complimented me on my appearance before! Not even my own mother!”
Mikan – “Nyehhh...I'm not talking about your looks!”
— Mikan and Nagito while talking about Nagito probably not being the culprit, during the first Class Trial in Danganronpa 2.

“But then, you meet a lovely nurse at the hospital, and end up becoming a lovey-dovey happy couple...”
— Nagito explaining to Hajime how his luck works by using the example of a car crash (bad luck) and meeting a "lovely nurse" afterwards (greater good luck).

“Nagito...is never going to die! I will save him by any means necessary!”
— Mikan determined to keep Nagito alive during Chapter 3 of Danganronpa 2.

“If she ended up like that just from "remembering"... Then all along, Mikan was never worth being a Symbol of Hope. Even if her words were influenced by the Despair Disease, if the disease turned her into that... If she lost herself to a simple disease, she was definitely unworthy of being a Symbol of Hope. So...let's just move on. C'mon, let's take all this despair and change it into hope!”
— Nagito losing his respect for Mikan after her Despair persona is revealed after the third Class Trial.

“Anyway, I don't think you're at fault, Mikan. Getting too pushy will have the opposite effect...She (Monaca) seems healthy, so why not let her be?”
— Nagito reassuring Mikan that she did nothing wrong to Monaca in Danganronpa S: Ultimate Summer Camp.

Fans ship Komamiki because how similar they are when expressing hate towards themselves (Nagito believing his talent is useless and not worthy of being around the ultimates and Mikan believing herself to be a mistake and constantly asking for forgiveness) and believe the two can console each other and even helping each other learn to love themselves. Their status as loners with no friends in the past and very few friends among their classmates also helped. Their dynamics of the "Medic Girl" and "Ill Boy" in Chapter 3 helped to fuel the ship further.

Another reason for shipping Komamiki is because it represents the idea of forgiveness and reconciliation. During and after the third Class Trial, the two were very hostile towards each other. However, after they have woken up from their comatose state, that hostile tension doesn't seem to be between them anymore. Komamiki shippers acknowledge the potential of Nagito finally being able to forgive Mikan since she is no longer under despair and that he now understands the whole situation regarding the Remnants of Despair. This forgiveness would also mean a lot to Mikan, who is always apologizing and seeking forgiveness from people.

Fans have also compared their physical characteristics to that of Kokichi Oma, making the headcanon/joke that Nagito and Mikan are Kokichi's parents.

However, while it remains as one of the more popular ships for both characters included, its popularity is still overshadowed by their other major ships, such as Komahina and Band Aid. 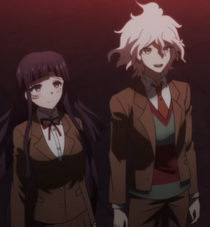 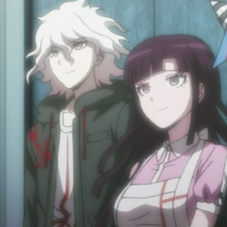 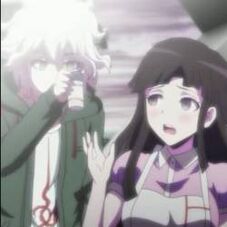 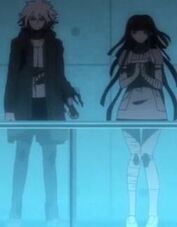 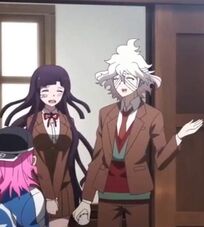 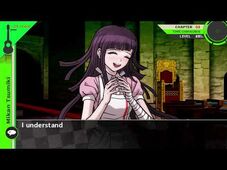 Komahinamiki refers to the ship between the two and Hajime Hinata