• Pair the Smart Ones — They share a high intelligence. Nanami and Komaeda are the only ones of the cast who get into situations analytically and are most useful with their testimony and arguments in Class Trials. Proof of their wit is that Nagito passed the Final Dead Room with ease, was able to devise an ingenious plan by sacrificing his life, while Chiaki demonstrated her serious intentions in the Killing Game, and serenely watched the alternating deaths of her classmates, in case it deserved the truth, against humanity.

Nagito – “Now then, I think it's time for me to get going too, so...Chiaki, would you like to go together?”
Chiaki – “...Me?”
Nagito – “I haven't really had a chance to talk to you, so I thought this would be a great opportunity...”
— Nagito teaming up with Chiaki to explore the Fun House in Chapter 4 of Danganronpa 2.

Komanami is the het ship between Nagito Komaeda and Chiaki Nanami from the Danganronpa fandom.

Before the tragedy, Nagito and Chiaki were classmates at Hope's peak academy. She was also his class representative, and Nagito respected her greatly, thinking she was their class's hope. Chiaki seemed to genuinely care about him, although she did not agree with his way of looking at things. They were pretty good friends.

When Chiaki set up some gaming consoles to play with their entire classmates, Komaeda also participated in playing with Chiaki and the rest, playing with Fuyuhiko, Teruteru, and Kazuichi, as they were taking turns.

When Chiaki was asked by Chisa, their teacher to be class representative, Nagito with the rest of the class, also encouraged Chiaki to agree. When she agreed, Nagito clapped, and went on a hope rant on how with Chiaki as president, the light in the class will grow brighter, everyone was annoyed with Nagito but Chiaki didn’t seem bothered and smiled to herself at the comment, and went back to focusing on her console.

When Komaeda came back from his suspension, everyone except Chiaki wasn’t excited to see him, thinking it was Mikan, and because they don’t like Komaeda. Chiaki was the only one who warmly welcomed him, though still disappointed because Mikan was still missing. When Nagito confessed he saw Mikan earlier, Chiaki along with the class was shocked. Chiaki stood up and said she had to figure out why Mikan wasn’t attending class, Nagito smiled at that. Chiaki and Nagito separated from the others and went together to find Mikan. Nagito inadvertently puts Chiaki's life in danger when he shows her a secret entrance to a room underground that he found while they were looking for Mikan. Chiaki questions if he already knew about the entrance, he claimed it was by chance, calling himself lucky.

While Chiaki used her phone as a flashlight as they both walked down the steps to the entrance, when Chiaki was questioning what a place like that was doing in the school, Nagito said the school might be hiding something that they don’t want anyone to know about, like human experiments, Implying he might have known about the Izuru kamukura Project. Chiaki gave him a Questioning and worried look.

They found the real Mitarai in the entrance, Chiaki commenting that he lost weight, confusing him for the Imposter. Junko shows up, and her and Nagito have a "Friendly" banter, Nagito pulls out a gun from his coat and points it at Junko, surprising Chiaki, Chiaki tries to negotiate with Nagito, claiming that killing is wrong, under any circumstance. Nagito claims Chiaki is wrong, and says what he’s doing is for the sake of hope, Ignoring her trying to persuade him.

While Nagito is once more talking to Junko, Izuru quietly sneaks up behind them, Nagito finally senses him, and quickly point the gun to him, and demands to know who he is, Komaeda’s gun gets "jammed" as he tries to shoot him, Izuru in slow motion claims that he has good luck too, just like Komaeda, and steals the gun from him and shoots him from behind. Chiaki, In horror, runs to him, lifting his head up and holding him protectively, seeing if he is alright, asking him to hang in there. Chiaki checks where he has been shot and notices Nagito's handbook has been shot instead, due to Nagito's good luck he was fine. Nagito admirably looks at Kamukura before passing out. Chiaki holds him in a protective manner while he is unconscious.

Chisa arrives at the scene a few moments later and tells Chiaki to carry Komaeda and run away, Chiaki is hesitant, but does so, Chiaki raps Nagito’s arm around her and carries him back to the classroom where everyone is, Chiaki gently places Nagito down, and informs everyone that Chisa is in danger, Everyone agrees to do so.

Nagito says that it’s too dangerous to go, and tells Nanami that she saw them too so they shouldn’t, saying they could die, they class feels hesitant at the thought of death and starts to reconsider not going, Nagito watches Chiaki intently as Chiaki encourages the class the Chisa was always there for them so they should be there for their teacher too. This encourages the class once more. Nagito laughs and reveals to the class he was only testing them to see how strong their hope was, and now that he believes them, he will go too. He tries standing up but is still weak from earlier and collapses while doing so, chiaki rushes to his side worried for him once more, and tells him to be strong. Sonia then demands Kazuichi to carry Nagito, which he agrees to instantly.

When forced to watch Chiaki be executed by Junko, Nagito, along with the rest of the class watches in horror, froze in the spot along with the class, Nagito had quite a rare reaction as he cried over her death and thought it was horrible, and was filled with despair. However, he then began to laugh madly while simultaneously crying, claiming she became a stepping stone to achieve a greater hope.

When it comes to AI Chiaki, Nagito does not seem to notice her that much at first, noting that she's a quiet girl who mostly plays video games and stares into space. However, he later appears to have a genuine respect for her deduction skills. In the Funhouse, he asks her to investigate with him, and is worried when she leaves the group without anyone noticing. Though Nagito is unaware of it, Chiaki cared about him, and while she was the traitor he tried to save in the end, sacrificing his life to do so, though this failed.

However, after the events of the first trial, when Nagito's true colors are revealed, Chiaki becomes the nicest person towards him, although she can be quite frustrated by him at time, even telling him to shut up, or be quiet during moments in the trials, which he immediately does so and stays quiet, until asked to speak again. Unlike other students, she is more understanding towards him and is not quick to accuse him of plotting something. Chiaki also appears concerned about Nagito's well-being when he's tied up, saying that she'll check on him later.

They provide each other with crucial information during class trials and Nagito even asks Chiaki to help him investigate at one point. When Chiaki was about to be executed, she had no ill will towards Nagito, believing that the difficult circumstances were the reason for his extreme behavior. They don’t hang out or are as close as real life Chiaki is with Nagito.

The ship sailed for similar reasons to Togiri and Oumatsu a result of Chiaki and Nagito being two of three main characters of their respective cast, and the protagonist being shippable with pretty much every cast member because of the Free Time Events. The two also became a common choice for those pairing together victims and culprits of specific cases. On AO3 it is the fourth most written ship for Chiaki and the seventh most written for Nagito.

Danganronpa 3 further fueled the ship, with Chiaki being the one acting the nicest towards Nagito. Nagito's high opinion of Chiaki also helped, with his respect of her being formed as a result of her becoming the symbol of their class's hope, being the class rep who unitied her classmates and took care of them during Chisa's absence.

The fandom has had mixed reactions to the ship, with some viewing it as healthy since Chiaki is one of the only people who cared about Nagito and others viewing it as unhealthy on both sides, not only due to Nagito's canon (yet one-sided) feelings for Hajime, but also due to the fact that victim x killer ships are fairly controversial within the fandom. Despite this, it's still fairly well-known, but not as well-known as some other ships. 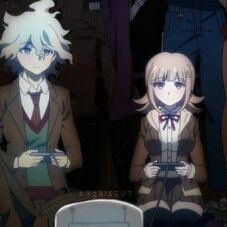 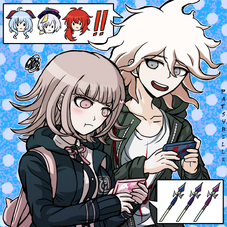 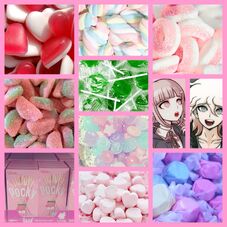 Komahinanami refers to the ship between the two and Hajime Hinata