The Legend of Korra

Korrasami is the femslash ship between Korra and Asami from The Legend of Korra fandom.

Korra at first wasn't particularly close with Asami when she first met her because she was dating Mako whom Korra had a crush on. Another reason was because Korra mistook the former for being too girly, saying things like if they're gonna go buy makeup, shopping, etc. Eventually, Asami proved her wrong by inviting Korra over to her mansion and took her driving in a race car. Korra finally began to like Asami, and admitted that she misjudged her. This can mark the beginning of attraction, however, Korra is still crushing on Mako at this point. In Book One, they are shown to respect each other and treat each other like equals. After Asami's father Hiroshi was revealed to be an Equalist, Korra invited her to come live on Air Temple Island.

Eventually, near the end of Book 1, Asami learned of the feelings between Mako and Korra and broke off her relationship with him. However, Asami never showed any hatred towards Korra about her relationship problems. In fact, Asami offered Korra support and helped her in her fight against the Equalists. She also continued to support Korra during the Water Tribe Civil War and the Unalaq crisis.

Two weeks following Harmonic Convergence, Korra and Asami seem to have grown closer. Asami teaches Korra how to drive and they both talk about their past relationships with Mako. Both are done with him for good and laugh everything off. Korra is glad that Mako never came between them. Asami later accompanies Korra to the Earth Kingdom while searching for new airbenders. Zaheer and the Red Lotus make multiple attempts to capture Korra. At one point, Asami tries to escape with an unconscious Korra who is in the Spirit World but they are captured by the earth queen's forces. Asami eventually helps Korra escape from the airship where they are being held as prisoners. Korra later finds out that the Red Lotus is planning to wipe out the new Air Nation unless Korra turns herself in. When Korra decides to do so, Asami protests and refuses to sit by while Zaheer takes her. However, Korra has already made up her mind, so Asami hugs her goodbye. Korra is eventually poisoned and almost killed by the Red Lotus. Asami clasps her hands and watches in worry as Korra is saved. Weeks later, Asami helps Korra get ready for Jinora's mastery ceremony as the latter is confined to a wheelchair. Asami can tell that Korra is feeling depressed and holds her hand, telling Korra that she is there for her. Korra eventually leaves for the South Pole and Asami offers to go with her, but Korra assures her that she will only be gone for a few weeks.

Korra ends up being gone for three years. Asami writes letters to Korra about how much she misses her and that Republic City is not the same without her. Korra initially does not write to anybody because she does not know what to say, but eventually writes back to Asami after two years. Korra confides in Asami about her inability to enter the Avatar State and the fact that she is still having visions of Zaheer. Asami is excited to finally see Korra when she hears that she is arriving in Republic City, but Korra does not show up.

Korra eventually returns to Republic City and reunites with Asami. They embrace and Asami compliments Korra hair which makes her blush. Korra, in turn, comments that Asami is looking snazzy. Asami initially gets angry at Korra when the latter shows concern over her seeing her father again and snaps at her for being gone for three years. However, they eventually apologize to each other. After the final battle, Korra and Asami talk one-on-one at Varrick and Zhu Li's wedding. Korra apologizes to Asami for being gone, but Asami is just glad that she did not lose Korra as she already lost her father. Korra comforts Asami and the two decide to take a vacation together to the Spirit World. As they are walking through the portal, the two smile at each other, hold hands, and gaze into each other's eyes. This marks the beginning of their romantic relationship.

Their relationship is further explored in the new comic release named The Legend of Korra: Turf Wars. The beginning of the comics shows them on their vacation and talks about how they developed their feelings for one another. Asami states that she wasn't sure Korra felt the same way she did before Korra left to the South Pole, and that she even was about to confess to Korra in one of her letters. Korra stated that she questioned her own feelings for Asami during the time she was away; however, she eventually realized during the time that she indeed had romantic feelings for Asami. After losing their materials due to an angry spirit, they decide to cut their vacation short. However, to make it memorable, Asami suggests doing one last thing before they go—confirming their romantic involvement with each other with their first kiss. Three weeks after Asami was rescued, Korra confessed to Asami that she is in love with her, to which Asami said she felt the same way about Korra.

“Let's do it! A vacation, just you and me! Wherever you like!”
— Korra, The Last Stand.

Korra – “The spirit world is a pretty unpredictable place. You never know when the ground might drop right out from under you. So, stay close. I don't want us to get separated.”
Asami – “Me either...”
— Turf Wars - Part 1.

This ship has risen during Books Three and Four among fans, and the finale of the show has confirmed that these two are canon. The creators are known for having the finale end with two characters that are finally confirmed to be romantically involved. In Avatar: The Last Airbender, Kataang is that couple that gets together during the finale. In The Legend of Korra, it ends with Korra and Asami gazing at each other's eyes before they enter the Spirit World for a vacation. Their relationship is further explored in The Legend of Korra: Turf Wars comics.

Despite starting out as a crack ship, Korrasami became increasingly popular throughout Book One and even won a Tumblr poll as the most popular ship after Book One. As Books Three and Four progressed, many fans grew hopeful that Korrasami might become canon, but others were doubtful that Nickelodeon would allow a same-sex relationship. However, when Korra and Asami smiled at each other and held hands at the end of the series, many fans concluded the relationship to be canon, including many who did not even ship Korrasami. However, some fans were still in denial and claimed that the moment just signified a close friendship. Three days after the finale aired, Bryan and Mike both posted on Tumblr and confirmed that their relationship was indeed romantic. While many were happy, some fans still felt that the relationship was far too out of the blue and had little to no development before the reveal in the final episode, while others feel it was done purely for fanservice, though the creators denied this. Other fans do not ship them because they are still supporters of its biggest rival Makorra. 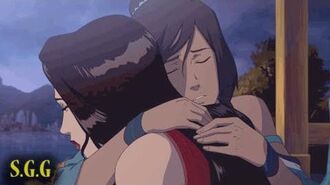 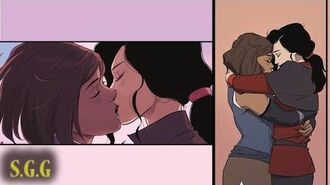 Love In The Time Of Comics - Korrasami Update

Retrieved from "https://shipping.fandom.com/wiki/Korrasami?oldid=181566"
Community content is available under CC-BY-SA unless otherwise noted.