Kristanna is the het ship between Kristoff Bjorgman and Anna from the Frozen and Once Upon A Time fandoms.

Kristoff first saw Anna when the two were children when Anna was getting healed by the Trolls. However, they didn't meet at that moment as Anna and her family had already left by the time the trolls discovered Kristoff and his reindeer Sven.

Years later, Kristoff and Anna met when Kristoff tried to buy mountain gear from Oaken, but due to the unexpected cold weather, prices had gone up. Kristoff insulted Oaken because of this and was kicked out. Anna bought the mountain gear and offered to give it to him on the condition he took her to the North Mountain.

During their time together, they got closer. When Anna was being turned to ice she thought that Kristoff would be the one to break it after Hans revealed that he was actually evil. Kristoff and Anna ran towards each other, but before they could reach each other, Anna went to stop Hans from killing Elsa.

Afterwards, Anna gave Kristoff a new sled to make up for the destruction of the old one. At first, Kristoff was reluctant to receive such a generous gift, but accepted it after Anna told him that he had been named Arendelle Ice Master and Deliverer. The two had a kiss, and started their romantic relationship.

As Anna's birthday was approaching, Kristoff helped Elsa prepare. Shortly before Anna's arrival, Kristoff and the others in the Courtyard tried to fend off Snowgies. As Anna arrived, the struggle ended, and the Snowgies went into formation. Kristoff wished Anna a happy birthday and presented her the cake, after which he declared his love for her.

Three years after the two met, Kristoff became family to Anna and her sister beside Olaf and Sven. Their shared times together has Kristoff thinking that it was time for them to take the next step in their relationship, but each time he tried to ask Anna to marry him he kept saying the wrong things while Anna's concern for Elsa keeps her from seeing what he is trying to tell her. Eventually he warms up to Anna and successfully proposes to her. Anna later becomes the new Queen of Arendelle and currently married to Kristoff.

Some time after their meeting, Kristoff and Anna got engaged. As their wedding was approaching, Anna went on to investigate a mystery involving the death of their parents five years earlier, delaying the wedding. While Elsa was worried that Anna was getting in danger, Kristoff was confident Anna could handle herself. During this time, Kristoff and Elsa encountered Ingrid, an aunt of Elsa and Anna who had magical powers like Elsa.

After Anna's return from the Enchanted Forest, the two kissed. Anna told Kristoff that she had found out the real reason why her parents had left, which was to find a way to get rid of Elsa's magic. Kristoff asked Anna what she was going to tell Elsa, to which Anna said that she was unsure.

Anna did not trust Ingrid, but Kristoff did not see anything suspicious about her. Anna made plans to find out the truth, while Kristoff stayed in the castle to guard. Ingrid had secretly spied on their conversation, and later cast the spell of shattered sight on Anna. This spell made Anna seal Elsa in a urn. After this, Anna was released from the spell. Ingrid attacked Anna in anger only to be stopped by Kristoff. Ingrid froze the entirety of Arendelle, including Kristoff and Anna.

It took over thirty years for Arendelle to unfreeze, although Kristoff and Anna were unaware that such a long time had passed. The two encountered Hans, and at first pretended to passively allow him to imprison them, only to fight back and escape. The two then planned to find a wishing star, for which they needed to find a pirate called Black Beard. The two found him and made a deal with him, only for it to turn out that Black Beard was actually allied with Hans. Kristoff and Anna were then sentenced to death by Hans. The two had their hands tied and got trapped into a coffer, which was thrown in the sea. Kristoff released the two from the binds. As she was afraid she would die soon, Anna started to recite her marriage vows. Kristoff told her that they would not get married until they were out of danger. At that point, Elsa had the wishing star, and used it to summon Anna and Kristoff to Storybrooke.

Not long afterwards, Storybrooke was affected by the spell of shattered sight. As a past victim of the curse, Anna was immune, but Kristoff was affected. Because of this, Kristoff started becoming rude and attempted to swim to Arendelle on his own. Anna knocked Kristoff unconscious with a bottle.

Later on, with the spell of shattered sight now undone, a portal back to Arendelle was activated. Kristoff and Anna went through the portal along with Elsa, and they reclaimed the kingdom from Hans. Kristoff and Anna then prepared to get married.

What Do You Know About Love? | Patti Murin, Jelani Alladin
Anna and Kristoff sing the song together as they disagree on the idea of true love while crossing a bridge.
Kristoff Lullaby | Jelani Alladin
The reprise of "What Do You Know About Love?", Kristoff sings it as he watches the trolls attempt to heal Anna and her frozen heart, all while realizing his feelings for her.

In the Once Upon A Time fandom, the ship is mostly acknowledged due to its canon status in the show and Frozen. It is not commonly involved in ship wars with other OUAT ships.

As part of the Rise of the Brave Tangled Frozen Dragons fandom, the two are often featured in AU scenarios. One example of this is a The Little Mermaid AU where Anna and Kristoff are cast as Ariel and Eric. Alternatively, it is common to edit Kristoff and Anna into couples from other fandoms, such as Robin Hood and Maid Marian from Robin Hood. Sometimes for a Modern AU, Anna is seen wearing the modern style clothes that the netizen version of her wears in Ralph Breaks the Internet, along with having netizen Anna spending time with a fanon version of a netizen Kristoff who is also from the Oh My Disney website. 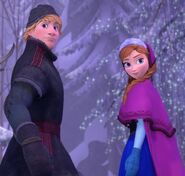 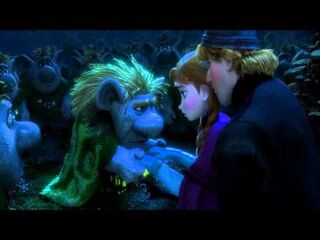