Krusie is the non-binary ship between Kris and Susie from the Deltarune fandom.

Not much is known about their past interactions before the events of Deltarune. But they are said to already know each other before since they are classmates and live in the same town; not counting the fact that Susie already knows and has a (good) opinion of Kris' mother, Toriel. But, it's implied that Kris and Susie never actually talked to each other before the events of Deltarune Chapter 1.

It's implied by the description of a item (Halloween Pencil) to an Indie game Toby guest-wrote for, that Susie used to chew Kris' pencil at the start of class; and then give it back to them after class was over. It's implied that Kris thought that this act of Susie's was not bullying, but was already the first sign of their friendship despite it not being it (Source of Information).

On this certain day, Kris came late to class; followed up by Susie a bit later. As a result, they were both paired up for the group project. As the teacher (Alphys), noticed the chalk was missing, she sent Susie to look in the supply closet for chalk (an idea of Noelle's) and immediatly after Susie leaved the classroom, asked Kris to go check on her as well so she wouldn't get in trouble. Kris ended up spotting Susie eating the chalk in the corridor, and as she was returning to class, she noticed Kris and interrogated them asking if they saw anything in that moment. As Kris remained silent, Susie approached them and said that she has to tell Kris something; which resulted in her her slamming them against a locker. Susie then told Kris that she knew they were likely going to blackmail her to Alphys so she would be expelled from school; although this wasn't what Kris was actually thinking to do. Susie then threatens to make Kris "lose their face", as she was going to bite it off; but then ultimately decided to let it go and said to Kris that they have a good mother, and it would be a shame to make her lose her child. After that, they decide to finally go to the supply closet get the chalk and return to class; as Susie also said that Kris would be the only one doing it. She dismissed Kris' choices saying that them don't matter. Through the way to the closet Susie makes a mean comment towards Kris depending if they walk fast or slow.

Susie and Kris proceed to the supply closet. As they are about to enter it, it appears to be very dark and even Susie gets scared of it. After noticing Kris was also scared, Susie has the idea about both of them entering it at the same time. So they get in it. They are unable to find a light switch and also the end of the supply closet. As Susie says to Kris that they worked hard enough and have to go back to class tell Alphys that they didn't find anything, they go exit it but the door shuts behind them. The floor then starts collapsing and they soon fall through the darkness and end up in the Dark World.

Kris and Susie are separated at first through the dark realm, but meet up after Kris finds her (and she is still is little rude towards them, blaming them for they both being on there). However, when they end up finding someone up the cliffs that begins attacking them with spades, Susie shows a little bit of a good side and tells Kris to run and even go down the slide to escape the attacks. After falling in the Castle Town, the two meet Ralsei, who tells them that they are part of a prophecy. Susie doesn't believe it (or either didn't want to be one of the heroes on it) and leaves Kris with Ralsei. Later, Kris and Ralsei find Susie. She joins their team in the Field of Hopes and Dreams but attacks foes instead of doing what Kris tells her to do.

As Susie becomes frustrated with Ralsei's demands not to attack enemies, she joins Lancer after the battle with K.Round, making her a temporary enemy to Kris and Ralsei through almost the entire section in Scarlet Forest. She joins the party again after Kris and Ralsei defeat her and Lancer in a battle.

Kris, Susie and Ralsei are later imprisoned by Lancer, as he doesn't want them and his father to attack each other. Susie manages to escape and free the other two, reuniting the team. This time, Susie agrees to do what Kris says instead of only fighting, since she promised to not hurt Lancer's father and decided to totally change her ways as well. Before exiting the elevator they took to the upper floor to the castle, Susie stops Kris a little bit and tells them that she will hear what they ask her to do and ACT too, but she also says that if they ask her to do something stupid she will go back to only fighting. She then tells Kris that she is counting on them.

After travelling through Card Castle and battling enemies and foes (like Rouxls Kaard), the trio ends up battling The King. They defeat The King and he then seems to be sorry and proposes peace with the heroes. As Ralsei believes his words and heals him, the King then backstabs the team and attacks them with spades. After Susie tries to get up, King launches spades towards her again but Kris then defends her with their shield, surprising Susie. When King picks up Kris to attack them with spades, Susie then attacks him and orders him to get away from Kris, calling them her friend. After the team manages to truly stop King (either with the help of Lancer or of Ralsei's depending in the past actions in the adventure), Kris and Susie seal the Dark Fountain and return to their school, now on better terms than before and considering each other as friends. The two leave the school building as school has already ended. Susie is excited to go on another adventure with Kris the next day, and the look Susie gives Kris and also the way she puts her hand on their shoulder really shows the genuine connection between them.

When Toriel calls Kris, very worried about them, Kris tells her that they were spending time with a friend; showing that they indeed like Susie and consider her (or started considering) her a friend. Also, when talking to Monster Kid in Hometown, Kris is shown to be very annoyed by them trashtalking her, and also are said to be even more annoyed when reminded that Susie isn't there with them.

After Kris gets in class in Chapter 2, Susie greets them happily, and even says that if she knew they were going to be late she would have been too. After class ended, Susie was shown to be waiting for Kris in the corridor so they would go back together to the Dark World. She still mocks up them a little bit, but now it's just mostly friendly teasing. before going back to the supply closet. Susie is also implied to be worried that if the Dark World wasn't real, could she and Kris still be friends with each other.

The two of them are shown to have become very close and friendly with each other in this chapter. Susie is shown to care about Kris in her own way in several times. Both their teas heal 120HP to each other, and if Kris hasn't eaten the moss in Cyber City yet, they can share it with Susie, who even becomes surprised by Kris having been waiting for her so they could share it.

After the adventure in Cyber World, Susie notices Kris doesn't want to walk home by themselves and decides to accompany them this time. This results in Toriel noticing her when she gets home with Kris and she ends up being invited by her to stay over (and later sleep there for tonight). Although Susie initially was a bit resitant, she was quickly win over when Toriel said she was baking a pie. Susie does get a little angry when she discovers Kris knew how to bake pies this whole time but never told anything about it to her, but she quickly lets go of it when she sees that Toriel was there with them.

Back in Hometown, if Kris and Susie go to the Bunker, they can hear Monster Kid and Snowy talking about it and apparently scared of what's on it. Snowy then asks Monster Kid if they are going to be a wimp like Kris, which pisses off Susie when she hears that. She quickly temporary turns back into her bully persona and scares off them for trashtalking her friend behind their back.

Kris and Susie end up sitting in the couch and starting watching TV together. Susie is once again shown to have become very comfortable towards Kris and joyfully talks with them. She even has the idea about both of them somehow bringing Ralsei and Lancer to the Light World so the four of them could hangout together. 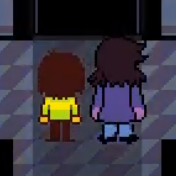 Falling into the Dark World 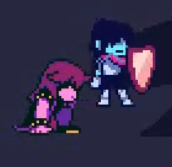 Kris defending Susie from The King 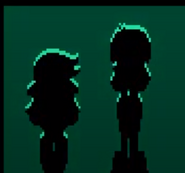 "Let's go back there tomorrow, alright?" 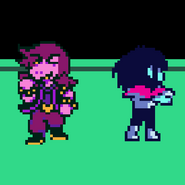 Returning/Jumping in a Dark World

Chilling at the beach