One Head Taller, Brains and Brawn, Opposites Attract, You Are Worth Hell

Kukitto is the het ship between Kuki Shinobu and Arataki Itto from the Genshin Impact fandom.

Prior to the events of the questline where Kuki first debuts, she states herself that she's been a part of the Arataki Gang for "a few years" by the time of the quest. Before, Kuki had been pressured by her demanding mother to become a shrine maiden as she didn't approve of Kuki's interests outside, especially in her desire to study law. While it isn't explicitly known how she came across the Arataki Gang, it seems to have been a surprise as Kujo Sara states that "it's a shame she's joined the Arataki Gang" despite her qualifications and talents and connections with organizations like the Tenryou Commission.

Kuki has also stated that she sees the Arataki Gang as family and wouldn't want to live any other way because of the freedom it affords her. She's gone on to say that being in the Arataki Gang allows her the freedom to live life exactly the way she wants, without the constraints her parents tried to enforce on her. In exchange, she utilizes her myriad talents (especially as a shrine maiden and lawyer) to the benefit of the Gang and was described as turning their entire operations around. As Itto's deputy, she has a place as his second-in-command and is invaluable to both him and the Arataki Gang.

During the Perilous Trails Archon Quest, once the Traveler mentions Kuki is behind him, Itto says he almost forgot about Kuki and introduces her right away, calling her one of the brightest and best of the Arataki Gang. Quickly later on when they're on the topic of Yanfei, the Traveler asks why they're in Liyue. Itto says Kuki was going to pick up her graduation certificate, and so he decided to come with her for the sake of her 'safety'. After Kiku hints to the Traveler, Itto says it’s time for them to get rolling as he runs off with her following. Not many minutes later, Itto comes back with Kuki and later on starts arguing with Yelan, causing her to step in the discussion, telling Itto to not be impulsive. However, he continues the argument with Yelan, despite Kuki warning him to not fight.

When the two and a few others fall into the mysterious place, Kuki suggests Itto stops provoking Yelan, as she believes he most likely won’t win the argument. However, he becomes annoyed and asks who's side she's on. She says she's pointing out facts, understanding how he feels. However, he also makes her life difficult by starting random fights. Soon after finding an unknown domain, once Yelan speaks, Itto tells her to stop acting like the boss and Kuki once again suggests he stops, causing him to finally do so. Later, when the Traveler is talking to everyone, Kuki suggests Itto and the others eat Roasted Lavender Melon out of their concern for their well-being and especially Itto's. However, Itto quickly declines the offer saying they're trapped in a life-or-death situation. Kuki once again recommends he eats some, and this time Itto accepts telling them to leave some for him after discovering she and Ushi are eating it all.

After they fall out of one of the domains, Itto mentions hurting himself and Kuki says she promises to try not to laugh, which he gets angry at and says she should be feeling sympathy for him. She however, says feeling sympathy would be a violation of his dignity. Kuki says they're allowed to laugh, causing most to laugh at him. Itto asks if Kuki has a heart, which she ignores. A few minutes later after they find a random door, Itto tells her to watch and learn why he's the boss and she's the deputy.

When Itto destroys one of the walls, he passes out almost falling on the floor, however Kuki catches him just in time. As he's asleep, she wonders to herself why he always does that. Talking to the others, she says there’s a distinction with him as he always sacrifices himself despite telling others not to. The Traveler asks why she didn’t try to stop him, and she says he wouldn’t listen either way. Kuki decides to stay with Itto despite the new passage being opened up plus being told not to. Yanfei casts a spell to protect them and Kuki keeps watch until the others return.

During the time when they escape to the surface, Kuki continues to act as Itto's support while the others protect them. Once back on the surface and they begin going their separate ways, Yanfei invites the pair out to lunch and to take them sight-seeing through Liyue Harbor before their return to Inazuma subsequently afterwords.

During the festival, it was confirmed by Mamoru that one of the reasons for it happening at all was to celebrate Kuki's graduation. Yet, when the Traveler asked why she wasn't present, Itto explained that they'd both been working hard to pass out flyers to generate interest. Mamoru went on to explain that he and Kuki had both been passing out flyers, but that Itto had left upon hearing that the Traveler was due to arrive and wanted to wait for them. After being interrogated about the drum the Traveler received, Itto weaseled his way out of it by saying he had to rendezvous with Kuki. However, when Itto got arrested for trespassing on the Shogun's grounds in an attempt to send her an invitation. When it failed, it ultimately fell on Shinobu to bail him out, as she usually did.

During the last legs of Shinobu's Hangout quest, it was during the Eavesdroppers, Key Decision, and Not Quite Your Daily Deeds portions that the Gang and Traveler intercepted a conversation happening at Uyuu Restaurant transpiring between a woman named Norika, Shinobu herself, and Sara regarding a new job opportunity. Alarmed at the apparent theft of their deputy, the Gang and Traveler raced to find Itto and tell him the news. In reaction to it, Itto expressed anger at the notion of Sara poaching one of the most valued members of his team and tried to justify it as a misunderstanding as Itto claimed that the Arataki Gang had a laid-back work environment compared to whatever the Shogunate could offer her. In an act of desperation, Itto resolved to tear down the flyers he'd made himself to prove he was contrite about improving so Shinobu wouldn't leave. In a last ditch effort, he also petitioned the Traveler to put on a show of wanting to join to help convince her to stay.

Going through other parts of the town, they discover that Itto, in his earnest desire to keep himself on Shinobu's good graces, personally went around to several establishments they'd obtrusively posted flyers and worked diligently until each premises was as it was before. To Shouta, a boy Itto had won candy off, they returned the snacks and promised never to take any more again. In the last leg before the community service ending, Kuki vouches for Itto and the rest of the Gang, proving their innocence. When they thought she was going to leave, Itto led a farewell and declared that they'd bought her a Naku Weed bracelet, but were proven wrong when it turned out Kuki was simply hired as a legal consultant due to knowing the laws of both Liyue and Inazuma.

Therefore, Kuki remained as a member despite the troubles the others caused, especially on Itto's behalf.

“Nobody questions my leadership in the gang, what I say goes — except when it comes to Shinobu. She's always challenging everything I say. And not only that — all the hard-earned loot I bring back and share with everyone? She goes and returns it! But also, she gets me out of jail, and out of every mess we get ourselves into, so I'll let it slide. Besides, I don't wanna get on her bad side... An angry Shinobu would make my life a nightmare.”
— Arataki Itto, About: Kuki Shinobu

“The boss has a lot of unpleasant memories from his past, but he still manages to stay positive. I'd say that kind of resilience is pretty rare. He treats us well and his character has a good effect on everyone in the gang. Of course, it's never an excuse for him to run amok with no consideration for others. Just let me know if he ever causes you any trouble and I'll be sure to make him regret ever being rude to you.”
— Kuki Shinobu, About: Arataki Itto

Kukitto has a modest amount of fanart at the moment, not many fanfics but is slowly getting more attention. Kukitto's rival ships are currently IttoSara and IttoGorou, two of Itto's most popular ships, plus Shinofei and HeiShino. The ship started growing more after the Archon Quest, Perilous Trails.

Many fans of the pairing like to depict them in much the same way Paimon describes them: as the "useless boss" and "super-capable subordinate" that results in many comedic moments between the pair. Their interactions could also be based on the Japanese comedic trope of the straight man (Kuki) and funny man (Itto), known as Manzai. Other tropes include Kuki being the one to discipline Itto whenever she has to bail him out of jail, or when he gets into messes with his antics. 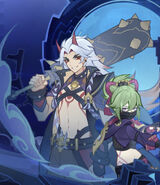 Official art featuring Kuki and Itto for the 2.7 update. 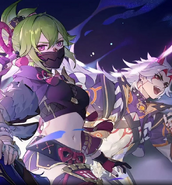 Kuki and Itto in official art for a 2.7 update livestream.

Kuki & Itto during the Hangout Event. 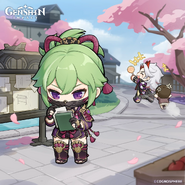 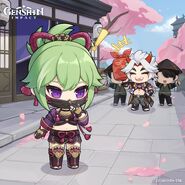