Friends/Classmates; one-sided crush on Shihai's side

KuroMori is the het ship between Shihai Kuroiro and Kinoko Komori from the My Hero Academia fandom.

Shihai and Kinoko are classmates, and follow the same dream to become super heroes. However, as the two are minor characters in the series, the two do not have as many interactions with each other. Though when Kinoko and Shihai then get some screentime, the two are often seen together. During the Joint Training Battle, it was hinted that Shihai may have a crush on Kinoko, due to his nervous behaivor around her. His crush was then later confirmed in a section of the Ultra Analysis Archive data book.

Shihai and Kinoko are first seen together when they are teamed up during the Joint Training Arc. They combine their quirks, Shihai using Black to morph into one of Kinoko's mushrooms while they try to capture Yuga Aoyama. When Shihai succeeds in capturing him, he informs Kinoko. Kinoko responds to this by praising him, and he relishes it. However, the moment is cut short when they realize that Fumikage Tokoyami is heading their way. Fumikage uses Dark Shadow to attack the both of them. Shihai calls out for Kinoko, before being captured in Fumikage's cape as Kinoko is restrained by Dark Shadow. Kinoko then uses Mushroom to grow mushrooms down Fumikage's throat so that he chokes and lets go, saving herself and Shihai.

Shihai thanks Kinoko for saving him, and she replies that it's only natural to save your teammates. After the Joint Training matches were over, class 1-B visits class 1-A's dorms. Kinoko talks to Fumikage about pictures of a pro hero, and Shihai is seen standing and watching jealously. He appears to be a bit apprehensive when other guys talk to Kinoko, even when it is only friendly conversation. Shihai and Kinoko then team up again during the Liberation War Arc. When class 1-A, class 1-B, and pro heroes work together to defeat Gigantomachia, Kinoko and Shihai are seen together. Shihai complains that there are no shadows due to the fire, and Kinoko adds that the fire burned off her mushroom spores.

Shihai – “Th-Thanks for saving me, Komori.”
Komori – “It's only natural to save your teammates, 'shroom."”
— Shihai thanks kinoko for saving him in the Episode 94.

KuroMori is not a practically popular ship in the My Hero Academia fandom, as neither Kinoko or Shihai got as much screentime. However, the ship still got some attention due to Shihai's confirmed crush on Kinoko. Due to both characters not having a lot of ships, which is again because of their lack of screentime, it became easily the most popular ship for Kinoko. Although, Shihai has a slightly more popular ship with Fumikage Tokoyami. KuroMori is often shipped alongside, IzuOcha, KamiJirou, TodoMomo, KiriMina/KiriBaku (interchangeably), OjiToru, and TokoTsuyu.

Shihai and Kinoko talking to Itsuka

Kinoko and Shihai surprised by Fumikage

Shihai thanks Kinoko for saving him

Kinoko and Shihai team up

Shihai and Kinoko listening to Itsuka. 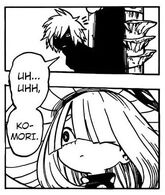 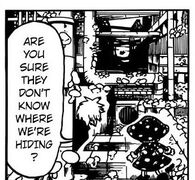 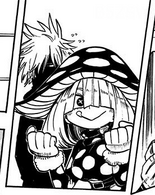 Kinoko and Shihai doing internships together. 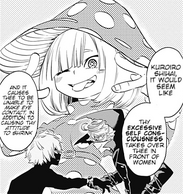 Shihai blushes when Odd Eye discovers his crush on Kinoko 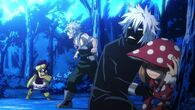