KuroTsuki is the slash ship between Tetsurō Kuroo and Kei Tsukishima from the Haikyu!! fandom.

Kuroo is a 3rd year at Nekoma, while Tsukishima is a 1st year at Karasuno. Both play the same position: middle blocker, hence the strong sense of rivalry between the two throughout the series.

The two first meet during the Karasuno vs Nekoma practise match in the first season. When Tsukishima gets disgusted at Hinata and Inuoka's energetic conversation, Kuroo goes up to him and says he should act like that once in a while, but Tsukishima says that's not like him.

During the Tokyo training arc, when Tsukishima walks past Gym 3 after the first day of practise games, he gets called out by Kuroo and Bokuto to do some blocking practice. Though he passes at first, Kuroo tells Tsukishima that Bokuto's one of the top 5 aces in the nation, and after also provoking him that since he's a middle blocker, he should practise more on blocking, he walks into the gym. After Bokuto scores multiple spikes past Tsukishima, Kuroo makes it a double block. When Kuroo tells Tsukishima to block the straight shot, Kuroo stuffs Bokuto, making Tsukishima slightly amazed. When Bokuto tells Tsukishima that his blocks are weak, he proudly says that he's still growing. But Kuroo 'provokes' him, saying that if he looks at it from that view, then Hinata will surpass him. Being unfazed by that, Tsukishima admits that his skills are no comparison to Hinata's. When he leaves, Kuroo's shocked to see that Tsukishima sees Hinata as superior to him, despite his intelligence and height compared to him.

The next day, Tsukishima goes to Gym 3 again to ask Bokuto and Kuroo what makes them so motivated to work harder in volleyball, despite it 'just' being a club. After his question's been answered, he gets dragged into personal practise, where Kuroo teaches Tsukishima how to make his blocks more powerful. With his teachings, when Karasuno play against Fukurodani in a practise game the next day, his powerful block makes Bokuto do a feint, making Kuroo smirk from the other court. Kuroo further gives Tsukishima more blocking advise during the 3-on-3, Cats vs Owls.

Ever since the training camp, Tsukishima has used Kuroo's teachings during games. During the Spring national arc, Daisho points out that Tsukishima ticks him off, as his blocks look similar to Kuroo's. In chapters 297: 'Master and student' and 320: 'Master and student, part 2' they both show their persistence during the Karasuno vs Nekoma national match. The two constantly get under each other's skin as the rallies increase due to their blocks. However, the two remain friends despite their rivalry, and at tmes Kuroo is seen cheering for Tsukishima, happy about his improved skills.

KuroTsuki does have a lot of fans in the fandom. One concept they use is Cat x Moon, with 'cat' referring to Kuroo and the moon referring to Tsukishima. This concept in some fanworks are sweet and "fluffy". In other fanworks, they're seen with BokuAka as their closest friends, due to the Tokyo training arc. Other fanworks use the plot of a distant relationship, as Kuroo's in Tokyo while Tsukishima's in Miyagi. The two face hardships trying to keep their relationship alive. Another fic from this is making them college students, with Tsukishima going to Tokyo to study so that he can be with Kuroo.

This ship is sometimes debated against TsukkiYama and KuroKen, and this can be shown in some fanwork. Some include Yamaguchi showing jealousy towards Kuroo.

On AO3, KuroTsuki is the seventh most popular ship under the Haikyuu!! tag.

Other fanwork like to take their relationship to the more mature side. This can be due to both characters having a more mature and snarky personality than most of the Haikyu!! ships. 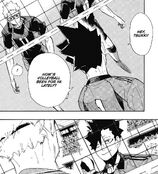 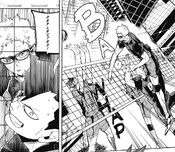 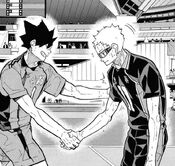