Kurocina is the het ship between Dark Pit from the Kid Icarus fandom and Lucina from the Fire Emblem fandom.

Dark Pit and Lucina have met in the Super Smash Bros. series. In Ultimate, they are both designated as "Echo Fighters" and are the only veterans to do so.

Lucina and Dark Pit are similar to their parent fighters in SSB. Lucina looks much like Marth, while Dark Pit looks identical to Pit, the exception being the color scheme. The two characters also have a dry sense of humor and are willing to save their loved ones, except that Dark Pit took that approach later on in his character development, can be selfish yet sane, along with being serious, with Lucina have this being like Marth’s, while Dark Pit is serious as he shows his suppression of his seriousness when Pit doesn’t show that.

Most people ship Dark Pit and Lucina on account of them being clones/Echoes. Dark Pit is often depicted as the tsundere type, appearing grouchy but having a soft spot for Lucina. As Dark Pit has a more angst vibe, and Lucina has a responsibility vibe, Lucina would be the one to teach about morals and learning on life choices. Dark Pit could actually help Lucina to be more honest and assertive towards others. Both of them can learn from each other based on their experiences of saving their loved ones.

As both of them are shown as clone fighters in Super Smash Bros 4 and are the only veterans to be assigned as Echo Fighters. The main reason is that Echo Fighters are easier to develop as they are based on the parent fighter (Marth and Pit). People could interpret as Dark Pit and Lucina being of the shadow of Marth and Pit and felt they couldn’t live up to them. In fan portrayals of Kurocina, In written fanworks, Dark Pit would try his best to impress her, giving some hints towards his feelings for Lucina. Even if it's something Dark Pit doesn't want to do, he is willing to do his dislikes if he can impress Lucina.

A YouTube channel named Dark Pit is a big shipper of Kurocina and would produce content for them, like fan fiction voice overs. Fanfics are frequent, but very minimum of fanart is produced, sometimes they are either with Shulk (as an OT3) or with Daisy (as an another Echo Fighter). Content for Kurocina is not uncommon, but isn't prevalent enough as the pairing isn't shipped enough by Super Smash Bros fans.

On Fanfiction.net there are 45 fanfics about the ship and the two characters in its Super Smash Brothers category. 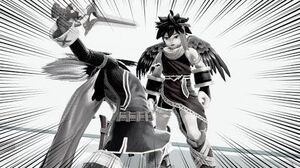 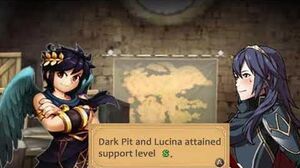