Kuzusouda is the slash ship between Fuyuhiko Kuzuryu and Kazuichi Soda from the Danganronpa fandom.

At first, Kazuichi and the Ultimate Yakuza seem to be at each other's throats quite often. Kazuichi makes comments towards Fuyuhiko such as "If you didn't have that big Yakuza family, you'd be nothing but a midget!" Which, of course, is returned by Fuyuhiko's own sharp tongue. As time passes, though, their disagreement with each other seems to dissipate, and they become tolerant of one another, and eventually open up to one another as they survived the Killing School Trip.[1]

In Chapter 4 of Super Danganronpa 2: Goodbye Despair, they were sitting together on Monokuma's train.

In episode 2 of Despair Arc, they were playing a game together, along with Nagito Komaeda and Teruteru Hanamura. When everyone is under the effect of aphrodisiacs, Kazuichi sees this as his chance with Sonia. Fuyuhiko helps him control himself and zips up his zipper. In episode 6, Kazuichi points out to Chisa Yukizome that even Fuyuhiko, the Ultimate Yakuza who distances himself from everyone, decided to come to their party to welcome back their homeroom teacher.

In Nagito's world, Kazuichi, Fuyuhiko and Nagito were best friends, even going so far as to consider him his brother. After Kazuichi's death, Fuyuhiko wanted to avenge his death, trying to kill the murderer. Fuyuhiko even considered Kazuichi as a brother to him.[2]

The ship sailed as a result of the bromance between the two, which developed with time as the boys got to survive the Killing School Trip together. Fuyuhiko trying to help Kazuichi control himself after being fed with the aphrodisiacs helped the ship's popularity. The bromance was even more prominent in Nagito's illusionary world, which fueled the ship even further.

Although this ship is quite popular, it loses in popularity to both characters' main ships, such as Kuzupeko for Fuyuhiko and Soudam for Kazuichi.

The two are often shown together on promotional art, usually either along with Gundham Tanaka, Hajime Hinata, or Nagito Komaeda. 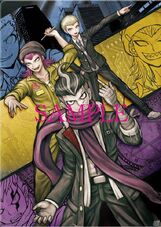