KyoJi is the het ship between Kouji Koda and Kyouka Jirou from the My Hero Academia fandom.

Although they hadn’t previously interacted, Kyoka and Kouji were paired together to fight in the Final Exams against Present Mic. The reason for their pairing was that their quirks would both struggle against Mic’s. They manage to get very close to the Escape Gate, but then realize that Present Mic would likely be waiting for them, which he was. He uses his Voice against them, pushing them back, and causing Kyoka to become weakened due to her enhanced hearing, and for her ears to bleed.

Every animal in range is scared away by this as well, rendering Kouji’s quirk useless. They come to the realization that they can still use insects they find, but Kouji is terrified of any bug. Kyoka sympathizes with him, and helps him to overcome, and they send the bugs over to where Mic waits for them. They crawl all over his body, causing him to pass out (from horror/disgust), which gives the two the chance to run to the escape gate. As Kyoka is still weakened from previous events, Kouji carries her.

It isn’t until season 4 of the anime (U.A School Festival Arc) that they get to share anything meaningful again. Their classmates loudly encourage Kyoka to sing for their concert, which scares her. As she turns her head away from the others, Kouji runs up to her excitedly and tells her she’d do amazing, which gives her the final motivation she need to perform. It is notable that it was him that was able to convince her. In the manga, after Kyoka gets back to her seat after telling Denki to stop when Denki talks about her room, Koji stares at her with light around him meanwhile around Kyoka are pretty dark[1]

Due to their lack of interactions- and as noted by some fans, Kouji’s lack of an attractive appearance, KyoJi is considered one of the many rare-pairs of the MHA/BNHA fandom. However, it still holds respectable popularity. A popular trope between fans is the extreme height difference between the two, which is commonly seen as cute. Both students are rather shy, and easily flustered as well, so fans like to imagine that they’d help each other work through this.

A few fans have also portrayed a liking for the concept of Kouji sending cute animals to bring gifts to Kyoka as well. 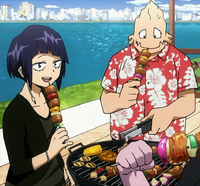 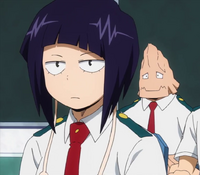