Ladybug is the femslash ship between Ruby Rose and Blake Belladonna from the RWBY fandom.

Ruby and Blake first meet at Beacon where Blake intervenes to stop Weiss arguing with Ruby. Despite helping out, Blake shows indifference to her as she is already walking away when Ruby tries to make conversation with her. Later, Yang pulls Ruby over to Blake to try and get them to speak to each other. Initially, this fails as Blake says she wanted to be alone to read her book, but the two find common ground over their shared love of books.

In the Emerald Forest when Ruby is looking for Yang to partner with her, she muses to herself about how Blake would be a good alternative, but that she might find it hard to socialize with her.

After it is revealed that Blake is a Faunus, Ruby tried to help her but was unable when she quickly ran out of the room. According to Ruby, she and Blake are already friends, as both already get along, although she is still quiet. Ruby also notes on how Blake's cat ears are cute.

In Chapter 6, Yang asks Ruby if Ruby has picked out a dress for the dance. Ruby responds with, "What's the point? Who cares about the dance if Blake isn't going?", showing her concern for Blake's well-being and happiness.

In Chapter 8, after Ruby explains to the rest of her team what transpired in Ozpin's office, Weiss tells her she was reckless for telling them what Blake learned while infiltrating the White Fang meeting, but Blake tells her "No, I think you handled it well" and smiles.

In Chapter 11, Blake is seen carrying Crescent Rose and is the one to give it back to Ruby.

When Ruby asks if "anyone else [is] starving" after the RWBY vs. ABRN match in Chapter 1, Blake smirks down at her and attempts a cool "I may have worked up an appetite". This is quickly ruined by her growling stomach and she looks at Ruby in shock. A few moments later, while team RWBY is talking to Emerald, Blake watched Ruby and continuously smiles at her, only occasionally looking at others.s.

While they are split up, Blake notes that she thinks of her teammates all the time, stating, "I loved them like I never thought I could love anybody.", though her guilt at the time makes her hope they hate her for leaving.

In Volume 5, Blake describes Ruby as being the "embodiment of purity". She and Ruby share a knowing nod when Blake first finds Team RW_Y at the Haven Academy. Ruby is the first to ask Blake what she's doing at Haven and is the first to truly accept her back, stating that Blake "not planning on going anywhere" was "all that matter[ed]".

In Chapter 1, Blake is the first to ask Ruby what the plan to protect the train is.

In Chapter 5, Blake is the first one to volunteer to go with Ruby to retrieve the lamp even though she's the one most affected by the Apathy.

In Chapter 6, Ruby calls out Blake's name and activates her silver eyes in an attempt to save her from the Apathy Grimm on Brunswick Farms. Later on, it is revealed by Maria Calavera that silver eyes activate out of love (and while in the presence of Grimm).

In Chapter 13, Ruby kneels down and tells Blake "You're safe, that's all that matters", reiterating that she cares more about Blake's wellbeing than any plan. Blake smiles at her and they hug.

In Chapter 1, Ruby is the first to come to Blake's defense against a racist drunk man. Blake has to calm her down, gently reminding her that they can't make a scene in such a unsure situation. Ruby backs down and lets Blake handle it, but continues glaring at the man until Weiss steps in and throws him in a dumpster.

In Chapter 2, Blake once again looks to Ruby's leadership first (telling her that "[the group] will follow [her] lead".

Blake also kneels down to check on Ruby after the confrontation with Salem in Chapter 11.

In Volume 8, Blake sides with Ruby against Yang, choosing to help launch Amity. In Chapter 1, Blake reassures Ruby that the group is still united, even while they are apart.

In Chapter 3, Blake teases Ruby about Penny understanding Ruby's Petal Burst before Ruby herself did. Ruby shoots back "Blake, she knew you were a Faunus before I did!".

In Chapter 4, Blake once again goes to comfort Ruby, suggesting that she try and call Yang to make sure she's alright.

In Chapter 5, it is implied that Blake recorded Ruby's message to Remnant (as you can hear her from off screen tell Ruby to go ahead with her speech), and Ruby leans her head on Blake shoulder while they watch the broadcast together.

In Chapter 8, Blake and Ruby have a long conversation while waiting for the Schnee Mansion's back up generator to turn on. Blake reassures Ruby that the generator will work, and when Ruby sighs and says "Nothing else has.", Blake tells her, "I know you don't always know what to do, but that's never stopped you from doing something". Blake then opens up to Ruby about how she was a lot like Ruby when she was younger, but "time and... a lot of other things" took their toll on her. It made her unsure if any girl like that could survive in their world, "until [she] met [Ruby]". Blake tells her "It was a little strange at first because you were younger but... I've always looked up to you, Ruby. And I still do." Ruby then looks up at Blake with her eyes filling with tears, blinks, smiles, looks up at her, and says "Thanks, Blake." They stand smiling at each other as the generator turns back on. The Hound attacks them, and Ruby cries "What is this thing?!" and Blake tells her "It's just a Grimm. Just focus." The Hound dodges Blake's attack and goes for Ruby again, damaging her Aura, then tries to fly off with Ruby, believing her to be Penny. Blake catches its leg with Gambol Shroud and holds it in place until it manages to shake the tether for a moment when Blake is distracted by a Centinel attacking, then it drops Ruby to the ground, shattering her Aura and knocking her unconscious. Blake then fights off a Cenitaur, speaking to the unconscious Ruby the entire time. She calls out to her "I don't know if you can hear me, Ruby, but I need you! We all need you!". The Cenitaur knocks Blake into a wall using one of her Dust Clones and Blake weakly begs Ruby to "Please...get up...", and then the Cenitaur picks Blake up, obviously intending to kill her. Ruby kills it, then giggles, smiles at Blake, and tells her "I could hear you." Blake breathes a sigh of relief and smiles back at Ruby, who then helps her to her feet.

In Chapter 13, Blake attempts to aid Ruby in her fight against Neo after she throws Yang off of the pathways Ambrosius created while trying to get to Ruby.

In Chapter 14, Cinder throws Ruby and Neo together off the path, and Penny throws Blake to try and save Ruby. Blake holds Ruby against her until Cinder burns through Gambol Shroud's ribbon, dropping the girls into the void under the paths.

Ladybug is considered to be a rarepair in the RWBY fandom, though still somewhat common as it involves two of show's main characters. Interest first began after the two were shown to have a shared interest in books and a similar sense of justice. It is often shipped alongside Freezerburn, as Yang and Weiss are without their partners otherwise. 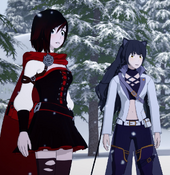 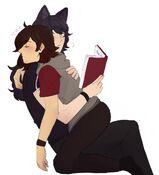 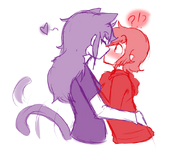