“I wish, my dear Laurens, it might be in my power by action rather than words to convince you that I love you.”
— Hamilton, in 1779.

Lams is the slash ship between Hamilton and Laurens, most commonly used in the Hamilton fandom.

Laurens and Hamilton first met in 1777. They were both aide-de camps to Washington in the Revolutionary War and bonded over their passion of ending slavery. They soon became very close friends during their time in Washington's camp and camped together in many instances. Correspondence between the two shows flowery language that was comparable to the words used by Hamilton when writing to the opposite-sex. This led to theories and questions of their sexuality and their relationship.

In 1778, Laurens challenged Lee to a duel after Lee's negative words towards Washington. Lee accepted the duel to defend his own honor and so the duel took place in Philadelphia on December 24, 1778. Hamilton, who was reluctant to the duel agrees to be Laurens's second while Major Edwards was Lee's. After the first round was shot, Lee declared himself wounded. Both of the men wanted to continue the duel but it was broken apart by the seconds.

When Hamilton declared his engagement to Elizabeth Schuyler, not much can be said about the emotions that both were harvesting. However, Hamilton makes it clear that Laurens still holds a dear place in his heart. Earlier, it seems that Laurens was trying to get rid of the affections shared between the two by finding Hamilton a wife. Hamilton saw through his intents and writes, "After reviewing what I have written, I am ready to ask myself what could have put it into my head to hazard this Jeu de follie [maddness game]. Do I want a wife? No--I have plagues enough without desiring to add to the number that greatest of all". To add on to that, in the letter stating his engagement, he writes that himself being wed would not impact his feelings towards his friend/lover and that what Laurens is doing is only in vain. "In spite of Schuylers black eyes, I have still a part for the public and another for you; so your impatience to have me married is misplaced; a strange cure by the way, as if after matrimony I was to be less devoted than I am now."(Hamilton in 1780).

Laurens was captured by British troops and is unable to attend the wedding between Hamilton and Schuyler. Hamilton had little relations between anyone so he invited little if not no people to his wedding. His invitation to Laurens shows how attached Hamilton became to his friend and only further proves the theory of their relationship.

Unfortunately, in 1782 Laurens was killed in the Battle of Combahee River. The letter by Hamilton inviting Laurens to Congress was unable to reach him in time. After his death, according to the biography of Ron Chernow, Hamilton shut off a compartment in him and never formed a bond with someone again.

It can't be completely proved that Hamilton and Laurens were lovers, but intact letters between the two can prove that Hamilton formed romantic feelings towards Laurens.

Hamilton and Laurens meet when Hamilton was talking to Burr in New York. They both instantly liked each other, and the two along with others, stole canons from British troops for the revolution. The two then attend a ball where Hamilton meets his wife, Eliza. Laurens later was the best man at their wedding.

Laurens challenges Charles Lee to a duel, and Hamilton agrees to be his second. Laurens wins however, Hamilton ends up getting reprimanded by Washington.

Laurens dies in South Carolina during the Revolution. When Hamilton duels Burr he see's Laurens as one of the people he will see on the other side. 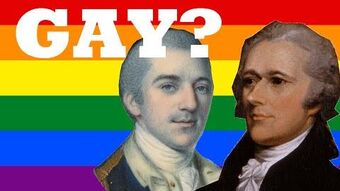 Are They Gay? - Alexander Hamilton and John Laurens

Retrieved from "https://shipping.fandom.com/wiki/Lams?oldid=118375"
Community content is available under CC-BY-SA unless otherwise noted.