Lancaster is the het ship between Jaune Arc and Ruby Rose from the RWBY fandom.

While seeing Jaune get motion sickness on the airship to Beacon Academy, Ruby nicknames him Vomit Boy.

After a rough encounter with Weiss Schnee and not being able to make any friends, Ruby is approached by Jaune who lends her a hand, pulling her off the floor. The two end up walking around school grounds together, both being awkward at first, but warm up to each other.

The two then later enter the auditorium together, only to be separated later.

The next day as everyone was getting ready for the Beacon Academy Initiation, after Jaune's failed attempt in flirting with Pyrrha Nikos and Weiss Schnee, Ruby helps Jaune out of the locker room.

During the Beacon initiation test, Ruby thought about teaming up with Jaune because she thought he was kind and funny, though she wasn’t sure about his ability as a fighter.

Weeks after the initiation, when Jaune began getting bullied and blackmailed Ruby showed concern and sat down to have a talk with him. She encouraged him to be the best team leader that he can be and promptly told him “nope” whenever he tried to say he was a failure. Their friendship continued on during their time at Beacon as shown when they shared a toast to being socially awkward at the Beacon dance, Ruby is shown to drink from the same cup Jaune drank from, as soon as he leaves and when Ruby cheered for Jaune during the Vytal Festival.

After the fall of Beacon Jaune decided to travel with Ruby, along with Ren and Nora, to Haven Academy in Mistral to find information about their enemies. Jaune received new armour and an upgrade to his weapon and upon seeing the rabbit logo of Pumpkin Pete on Jaune’s hoodie after he removed his old armour to change Ruby playfully laughed at him before falling to the floor giggling.

As they continued on their journey Ruby teased Jaune about how he has seven sisters but it was short lived when they came across an attacked village and a dying huntsman. She attempted comforting Jaune after the man passed on before anything could be done. She also showed concern and respectful distance when she came across him training to a video of Pyrrha while Ren and Nora slept.

When Tyrian came to take Ruby, Jaune stepped in front and stated that he and his team won’t allow that to happen. He was visibly distressed when it seemed Tyrian was going to poison her with nothing he could do, but thankfully Ruby’s uncle Qrow arrived in time to stop it. After Qrow explained why he was following the group Jaune is angry that Ruby was essentially used as bait to lure Tyrian out.

The two remained together when the group had to split up so they could find a faster way to Mistral since Qrow had been poisoned during the battle and they needed to get him help. They carried Qrow on a stretcher into an abandoned village and looked for medical supplies, but upon finding nothing Ruby apologized to Jaune, revealing that she had been burdening herself for getting them caught up in everything. Jaune comforted and encouraged her, telling her how her determination despite losing so much is what inspires them to follow her and do the right thing.

Later, once they were finally in Mistral and Haven academy got attacked, Jaune went after Cinder who was Pyrrha’s killer. Ruby immediately called out his name in concern and attempted to run to his side before being stopped by Cinder’s disciple Emerald. While the two fought Ruby tried to look over at Jaune and once she saw him and Cinder charging each other she got so scared that she activated her silver eyed powers but was consequently knocked out by Emerald.

After saving Haven the group headed onto a train to Argus so they could get to Atlas. Grimm began to attack and it is decided that the group needed to split up for a while. Jaune made Ruby promise that she and their allies would meet up with him and his team in Argus.  The promise was kept and the two reunited with a hug and Jaune tearing up to which Ruby gave him a soft smile and told him that she had promised. When Jaune got angry at Oscar and almost physically assaulted him, Ruby was the only one to snap him out of it.

Ruby and Jaune were seen briefly holding each other's hands while admiring the ace operatives. In one of the later episodes Jaune tries to call Ruby saying they have a serious problem. When the call gets disconnected Jaune worriedly yells out for Ruby and asking if she's still there and if she can hear him.

In volume 8 chapter 10 when everyone was reunited with each other, Ruby and Jaune briefly ran up to each other and held each other's hands. In the next chapter while trying to constrain Penny, Ruby asks Jaune to hurry and boost Penny's aura, to which he quickly does so.

The ship between Jaune and Ruby is one of the more popular ships in the rwby fandom. Whether people ship it or not, the fandom usually agrees on the fact that Jaune and Ruby have a very good, healthy, and supportive relationship with one another. Many people might also ship Lancaster beacause of the paralels with Ruby's own parents, Summer and Taiyang. Just like Jaune, Taiyang also lost his first love Raven and then fell in love with and ended up with his second love Summer. Summer and Taiyang also appeared to be really close friends and they both physically resemble Jaune and Ruby quite a bit. 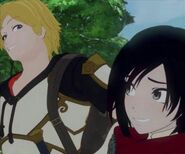 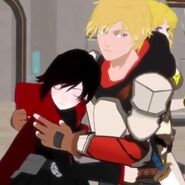 "To the social awkward." 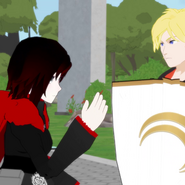 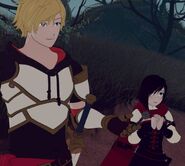 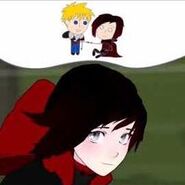 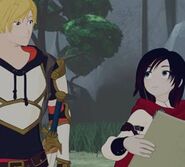 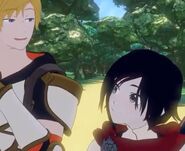