LiZor is the family ship between Lisa Minci and Razor from the Genshin Impact fandom.

Lisa and Razor don’t have any interactions in the game although it was considered by both characters that they see each other as friends. Even when reading through their voicelines about each other and knowing about Razor's lore, it seems that these two are very close. There’s also a slight possibility that both characters might have the chance to interact with each character in-game.

Razor and Lisa met when Razor was still a little boy who was found by Varka, the Grandmaster of the Knights of Favonius. When Varka set out on an expedition outside of Mondstadt, he gave Razor to Lisa as his new mentor and teacher when he's gone. Since then, Lisa thought Razor specific words such as "friends" and the "sun" and would also guide him to his vocabulary.

One day when Razor was training with Lisa in the library, he asked "Master, what is... 'friends'?". Lisa then just smiled at Razor and yawned without answering his question. It was implied that Lisa was training Razor to learn the word "friends" by himself. Later when he met Klee in the woods outside of Mondstadt, he learned that friends was also a similar word to "Lupical".

When reading through Lisa’s voicelines, it is showed that she and Razor often train in the Knights of Favonius Headquarters. She would often train with Razor about his combat skills and learning several elemental energy techniques which Razor learned very quick. She was impressed by this so she tried to guide him further away. Even during their combat practices, she would often treat Razor like a puppy and would call him a “little wolfie” since he was raised by wolves when he was younger.

In Razor’s voicelines, it is implied that Razor sees Lisa as his mentor or sensei after getting trained by Varka, who gave him his name and was the first one to train him when he was younger. He also describes Lisa’s skills as a lightning that makes the sky black. He also stated that she can be really strong during practices and often being scary when he causes troubles.

“Lisa lightning makes the sky black. She is strong. She is scary.”
— Razor’s voiceline about Lisa

“Come on Razor, that's it, good boy! Let's do some combat practice — I've found you the perfect partner. Hey! Come back!”
— Lisa’s voiceline about Razor

Razor and Lisa’s relationship isn’t really popular in the fandom although many fans see them as a mother-son relationship because of their funny dynamic together. It is also can be disliked in the fandom when their relationship becomes romanticized because of Lisa’s possible serious age-gap to Razor and her adult-like appearance. Fanfic writers would even make little sub-plots where Lisa is taking care of Razor in the Knights of Favonius Headquarters. There's also a common running joke in the ship fans that Razor is the son of Lisa and Jean, one of the closest friends of Lisa and being her most famous ship, JeanLisa.

There’s also a certain theory among fans where Lisa and Varka had an intimate relationship together and Lisa started taking care of him as his mother while Varka being the self-proclaimed father. Although, there still isn’t any confirmation about Varka’s age or appearance so this theory would mostly be denied.

There are currently 30+ fanfics about them on AO3 and there are several fanarts of them training together or Lisa taking care of Razor like a mother. 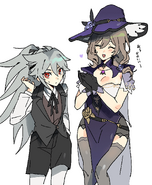 Why razor is afraid of lisa