Loki, known as both Loki Odinson and Loki Laufeyson, is a character from the Marvel Cinematic Universe and Marvel comics fandoms.

Loki is the adoptive son of King Odin and Queen Frigga of Asgard, and the adoptive brother of Thor. He is the biological son King Laufey of Jotunheim, but Odin took him as a child during a war and raised Loki as his own. This is a major cause of conflict for Loki, and much of his character development has involved his resistance or acceptance of his heritage and his place within his adoptive family.

In the comics, Loki is canonically genderfluid. He shapeshifts easily between his male and female forms, although he typically presents as male and uses male pronouns. He doesn't use terms like bi/pan/omnisexual to describe himself, because the concept of sexual identity doesn't exist in Loki's culture, but he is open to partners of any gender.

In the MCU, Loki's TVA variant file lists his sex as fluid though he typically presents as male. He's had past romances with both men and women. One Loki variant from an alternate timeline is a woman that goes by Sylvie.[1] Loki and Sylvie eventually fall in love with each other.[2]

Tesseroki — the ship between Loki and the Tesseract

Loki has had canonical romantic relationships in the Marvel Cinematic Universe with both men and women, although none have been shown onscreen until his TV series, where Loki and a female version of himself called Sylvie fall in love (see: Sylki). The TV series also implies that Loki and Sif had an intimate encounter prior to him cutting off her hair, which is confirmed by series composer Natalie Holt.[3] His most prominent relationships are with his family, notably his adoptive brother Thor (see: Thorki) and his adoptive mother, Queen Frigga.

Loki’s most important past canon romantic/sexual relationships have been with Amora, Loreli, Sigyn, and Angerboda. Amora and Lorelei are sisters and sorceresses who are generally up to no good, and Loki has teamed up with them as antagonists against Thor and Asgard on a number of occasions. Sigyn was Loki's wife, although they are separated. Angerboda was a giantess.

His most notable canon family relationship is with his adoptive brother Thor Odinson. (See: Thorki.)

Loki's canon best friend is Verity Willis, who has the power to see through any lie. (See: Lokity.)

Loki has a canon love-triangle between Amora and Theo in the novel Loki: Where Mischief Lies.

Amora accepts Loki for who he is and encourages him to use magic. They make out, and possibly more. However, Loki realizes that Amora intends to betray him in a plan to take over Asgard for herself.

Theo and Loki develop a close relationship while investigating the mysterious deaths in London with the SHARP Society. Theo invites Loki to stay at his apartment during his time in London, and they share a bed. Loki and Theo kiss. Loki promises to take Theo back to Asgard with him, but leaves him on Earth and returns to Asgard alone.

The most popular ships involving Loki in MCU fandom usually involve him being with one of the Avengers. He’s also been paired with Asgardians, Jotuns, humans, and other aliens along with original Characters of every gender and orientation. 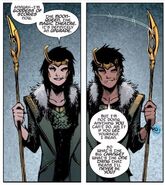 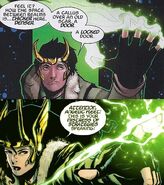 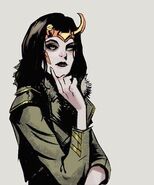 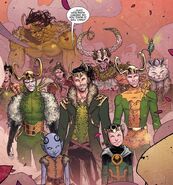 Most of Loki’s forms 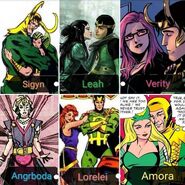 Some of Loki’s relationships and friendships 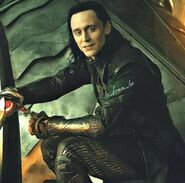 MCU version of Loki from Thor: The Dark World

Loki and his adoptive mother Frigga in Thor 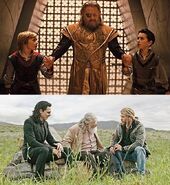 Loki as a child with his adoptive brother Thor and adoptive father Odin in Thor and then as an adult in Thor: Ragnarok