Lokity is the friendship between Loki and Verity Willis from Marvel comics fandom.

Verity Willis was introduced in the comic book series Loki: Agent of Asgard. Her superpower to tell when someone is lying made her of particular interest to Loki, and the two became best friends. Verity otherwise had trouble making/keeping friendships because her ability made it difficult. That Verity knew Loki was telling the truth, despite his reputation as a liar and trickster, made her particularly important to him since he was trying to remake himself into a better person.

Loki and Verity first meet while speed-dating, and Verity sees through Loki's illusion of respectable clothing to his eccentric outfit. The speed-dating had been going poorly, but Verity is fascinated by Loki's (truthful) story of what he's been up to, which is tracking Lorelei for Asgard who is then conning men at the same speed-dating event.[1] When Loki later has to move his apartment, he moves next to Verity.

Verity doesn't want to be involved in any heists or fights or anything of the sort, but she's regularly caught up in events since she's friends with Loki, such as helping him break into Asgard's dungeons,[2] and breaking him out of a prison made by Doctor Doom.[3] When Loki's "axis" is shifted during the Axis of Evil event, Verity knows something's wrong and calls Lorelei for help.[4] When the old King Loki returns from the future and tells Verity that he's what her Loki will become, she leaves, but she later calls Loki to tell him to not give up because she still believes in him. When Loki breaks out of King Loki's hold and remakes himself, he first visits Verity.[5]

When the world is ending, Loki saves Verity's life by binding her soul magically to a bracelet.[6] Verity is initially furious since Loki killed her physical body to do this, but Loki tells her that they're friends and she doesn't want to lose Verity.[7] In the void after the end of everything, Loki draws a door marked "Next" and asks Verity to come with him.[8]

Verity eventually took form again and became a journalist. When Loki was having problems with his past and time-travel, he calls upon Verity to see if he's lying, because Loki isn't sure himself if his memories are real. Loki admits it's also because he's missed her. She helps him realize that his memories become reality as he remembers them. Loki creates a portal doorway, takes her hand, and invites her to join him on his next adventure.[9]

“I... I know our friendship is stitched together with betrayals and apologies. It's probably horribly toxic in all sorts of ways... I... ...I wouldn't blame you if you called it quits on us. But I hope you don't. Our friendship is... it's important to me. You're important to me.”
— Loki apologizing to Verity after the Axis event, Loki: Agent of Asgard #10

The friendship between Loki and Verity has been positively embraced by fans of Loki's arc, and the two are generally reflected as friends in fanworks.

Loki and Verity in Loki #5 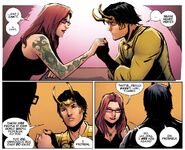 Loki and Verity in Loki: Agent of Asgard #2