Shipping Wiki
Register
Don't have an account?
Sign In
Advertisement
in: Ships, Ships/Het, One Piece/Ships,
and 5 more

LuReb is the het ship between Monkey D. Luffy and Rebecca from the One Piece fandom.

Luffy and Rebecca share a close friendship that was forged in their battle against Dressrosa’s usurper, Donquixote Doflamingo. Whilst very briefly enemies, Luffy was able to sway Rebecca to see him as an ally and the two quickly became friends. Luffy admired Rebecca’s determination to fight even though she is, relatively, weak, and chose to defeat Doflamingo primarily as a promise to her that he would do so. Rebecca became very fond of Luffy and felt indebted to him for having saved her kingdom and help her be reunited with her father.

The two originally met in the Colosseum after Luffy defeated Spartan, who had bullied Rebecca repeatedly. Whilst he admired a statue of Kyros, she came up to him to thank him and informed of the history behind the statue. This impressed Luffy and Rebecca briefly bonded with him. Soon enough, Luffy’s raw and overwhelming strength became apparent to Rebecca and she saw it as a threat to her goals to defeat Doflamingo. She decided to try and assassinate Luffy but was reluctant to do so, this hesitation allowed Luffy to effortlessly gain the upper hand. After hearing her reasoning, he empathised with her greatly and the two became good friends.

The two get on very well. Luffy was quickly won over by her kindness, and even more so when she happily bought him some food to eat. She also rescued him when he was being harassed by numerous other contestants in the gladiatorial games. Even after she attempted to kill him, he held no anger over it as he believed her to be a genuinely kind person. As a result, he was more than willing to hear her out. Rebecca immediately took a liking to Luffy as well, particularly because of his shared interest in the statue of Kyros. It was only because she came to fear his strength that she chose to try and kill him, and even then hesitated. She was stunned when Luffy chose not to punish her for trying to kill him, even though she was more than willing to accept any punishment, which deepened her admiration.

Although she is a capable fighter, having held her own against Cavendish’s Hakuba, she is extremely weak compared to Luffy and Doflamingo. This leads to her developing a great reliance on Luffy. Having gone from strenuously and tediously trying to rescue the kingdom that was taken from her by Doflamingo, to suddenly having a powerful and capable ally in Luffy brought her incredible relief. She becomes more emotional as the events go on and is often reassured by Luffy himself. He often goes out of his way to either protect or comfort her. Luffy was also the one to inform her that her father is actually Kyros, the man who’s statue is in the colosseum, and promised her that he would personally defeat Doflamingo. A reoccurring theme for Rebecca is her habit to call Luffy by his cover name, “Lucy”.

An early sign of Luffy’s care for Rebecca was when he became furious as the crowd boo’d her during her match at the colosseum. In response he passionately cheered for her in spite of everyone else’s animosity. The promise to defeat Doflamingo for her acted as a major driving force for him, as he had initially only arrived to simply destroy the SAD factory on the island. He often became angry and volatile against Doflamingo for his actions to Rebecca, her family and her people. Whilst Luffy generally dislikes cowards, he has no reservations for the weak. As a result, Rebecca earns Luffy’s highest regards for fighting despite not being strong, making him more than willing to help her. Luffy also comforted her on two separated occasions, one being after the revelation of her father, and the second time when she expressed doubt that Doflamingo’s terror can truly end. For the latter, Luffy firmly reminded Rebecca that his name is not “Lucy” but is actually “Luffy”, the man who will become the king of the pirates. This left Rebecca both starstruck and filled with complete faith in him to win.

The emotional depth Rebecca has for Luffy was apparent when she was being forced by Doflamingo to cut down her own auntie, Viola. She desperately calls out his name in tears, with Luffy arriving just in time to save them both. Rebecca was also inconsolable when Luffy finally defeated Doflamingo. She spent much of the fight spectating it, watching him in the sky in hopes for his victory. She cried tears of joy after Luffy lands the final blow that leaves Doflamingo unconscious. In the immediate aftermath, she took care of an exhausted Luffy and allowed him to sleep peacefully on her lap, but she could not help but allow her tears to drop all over him.

Another sign of Luffy’s care for Rebecca was when he reunited her with Kyros. Following his victory and recovery, Luffy, having earlier learned who Rebecca’s real father is, was not happy to leave them separated. As a result, his last act on Dressrosa was to storm the Palace grounds and take Rebecca back to her father. Rebecca, who was initially upset she could not say goodbye to Luffy, was ecstatic to see him, but was then challenged by him on whether she was happy with the outcome regarding her father. Tearfully, she conceded she was not and allowed him to “kidnap” her so she could be reunited with him, happily giving up her royal status. Once they were together at last, Rebecca, alongside her father, watched as Luffy successfully escaped Fujitora and leave Dressrosa.

Since Luffy left, Rebecca has developed a high-degree of interest in him, constantly wanting to talk about the Straw Hat captain and keep up with his actions. When on their way to the Levely, she was insistent to talk about him, especially after his feats on Whole Cake Island, even though she ran the risk of exposing the kingdoms friendly relationship with a notorious pirate. She was overjoyed to find that Koby, who is a close friend of Luffy’s and was escorting her to the Levely, was equally as interested in him and the two confided in each other their love for Luffy. When she arrived at the Levely she was even happier to meet Vivi and Shirahoshi where they all bonded over their friendship with Luffy.

LuReb is not a very popular pairing within the One Piece fandom. However, it still shares a sizeable fanbase, with people very much enjoying the close relationship Rebecca has with Luffy. The fans against this pairing typically cite the lack of romantic substance, not just between the pair, but in One Piece overall. Furthermore, some fans do not like Rebecca in particular, criticising her for her excessive crying and emotional attachment to Luffy.

Some fans tend to only embrace Rebecca as a partner for Luffy under the “Luffy Harem” ship. Whilst still seen as a joke, the harem is part of a running gag of Luffy gradually earning the intense admiration of numerous women, Rebecca included. As such, Rebecca in this ship validates it, which in turn earns some of the fans’ approval.

In terms of rivalry, LuReb is very much out of it’s depths compared to the extreme popularity of LuNa, the ship between Luffy and Nami, and LuHan, the ship between Luffy and Boa Hancock. In fact, some fans have recently shipped Rebecca with Koby, who escorted her to the Levely, as they seemed to bond over their mutual affection for Luffy, which in of itself could make them a possible pair. 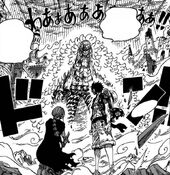