Luaisy is the het ship between Luigi and Princess Daisy from the Super Mario fandom.

Princess Daisy is one of the many royal figures Mario and Luigi know. Despite being saved by Mario in Super Mario Land, she and Luigi have a tendency to be partnered up in sports games more frequently. It is unknown when specifically Luigi and Daisy first met, however, their first canon interaction has Princess Daisy act as Luigi's caddie in NES Open Tournament Golf.

Ever since then, the pairing has been constantly teased throughout the multiple spin-off games. In both Mario Party 5 and Mario Party 6, their team name is that of "Steady Sweeties." The eighth installment, however, refers to them as "Tango Tanglers." Mario Party DS instead calls them "Shy Sidekicks." Mario Kart Wii has two different statues of the pair dancing together in Daisy Circuit. One version is of them as adults, while the other has their baby versions instead. The official Mario Party 4 guide by BradyGames even goes as far as to state that Luigi has a crush on Daisy, with the latter possibly returning said feelings.

Both Mario Super Sluggers and Mario Tennis Aces have Daisy show concern for Luigi in certain cutscenes. Also in Aces, not only does Daisy request Mario bring Luigi back safely after he was possessed, but is the first one to notice Luigi reaching for Lucien. The Sarasaland Princess also presses Toad for information after Luigi's possession, shutting down idle chat in order to save Luigi. Fortune Street contains character-specific dialogue depending on who is chosen by the player. When Daisy offers the player a trip to Sarasaland, Luigi considers the player lucky. If the player is Daisy and trades shops with Luigi, she will say this: "You're the only one here I can truly trust, Luigi... Trade shops with me, won't you?" She is also shown to encourage Luigi to try harder if she lands on any of Luigi's cheaper shops. During her awards ceremony in Mario Power Tennis, Daisy calls Luigi "sweetie" as she rides around on skates to collect her trophy. Before this, Luigi held said trophy.

Super Smash Bros. Melee describes Princess Daisy as being "Luigi's answer to Mario's Peach." Super Smash Bros. for Wii U, similar to Mario Party 4, claims that Luigi has a crush on Daisy. Peach in her Daisy alt can also be seen grabbing Luigi in Peach's Classic Mode ending. With her inclusion in Super Smash Bros. Ultimate, Daisy's end card shows Luigi peeking his head out from under the stage. In the same game's Spirt Mode, the duo will fight the player together as the Luigi (Mario Tennis Aces) spirit. They are also fought together in Bowser Jr's classic mode.

In the crossover series of Mario & Sonic at the Olympic Games, the pair do not have any ceremony animations together. Instead, if the characters are together for Figure Skating, Luigi can be seen holding Daisy's waist.

“You're no stranger to adventure, so I'm sure you'll be fine. Please... just bring Luigi back safely.”
— Princess Daisy, Mario Tennis Aces

“She may be the princess of Sarasaland, but she doesn't exactly have the poise you might expect from royalty. Daisy is more of a headstrong, active type. That's all part of her charm, though, and rumour has it that's why Luigi's so smitten with her.”
— Daisy's trophy, Super Smash Bros. for Wii U

As one can guess, the reason the pair is shipped together is due to canon constantly teasing it. Their dynamic of opposites attracting also allows for both platonic and romantic potential. Some may portray Daisy as being outgoing and the driving force in the relationship, while others may have Daisy act more introverted or akin to her Mario Tennis personality.

Fanart will typically portray the couple playing sports in some regard due to them first being shown together in some of the sports games, but also due to Daisy's energetic personality. If they are playing a game against each other (such as tennis or baseball), Daisy is usually the one winning. Gardening is also a common theme due to Daisy having multiple flower-designed powers.

Fanfics may share similar concepts with fanart, but can also delve deeper into romantic themes as well. These include concepts such as romantic confessions, date nights, anniversaries, and even marriage proposals. They may also have a situation in which Luigi saves Daisy, or the other way around to subvert the previous. This, of course, references the series' history of saving princesses being a common plot point.

Both Luigi and Daisy have canon baby counterparts in the series. With that said, some artists may portray the characters as childhood friends. In these instances, common trends include Baby Daisy calming down a crying Baby Luigi or Baby Luigi pushing Baby Daisy on a swing set. They may also be portrayed go-karting together.

In Super Paper Mario, Luigi is brainwashed into Mr. L. Unlike his original self, Mr. L is far more cocky and constantly mocks those who he considers 'Juniors.' After the game's release, multiple fans have made scenarios in which Mr. L and Daisy meet. Interruptions may very. Due to Mr. L acting vastly different from Luigi and some considering him a separate character, different tags may be used instead.

Currently, there are around 100 works on AO3 of the ship. Its current ranking in the Super Mario tag is 2nd place, right behind Mario and Peach. For Daisy, it ranks at number 1. Luigi ranks the ship, including non-Luigi ships, at 2nd place. On FanFiction.net, in the Super Mario fandom, the amount is instead around 550 fics, which is five times more. The Super Smash Bros. fandom, however, only has 20. 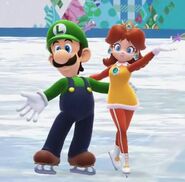 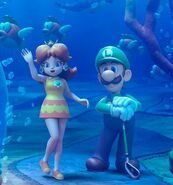 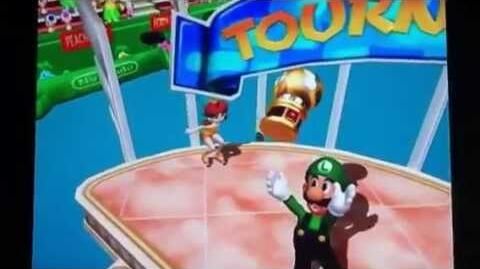 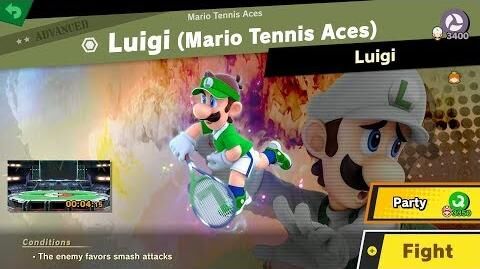 Retrieved from "https://shipping.fandom.com/wiki/Luaisy?oldid=168421"
Community content is available under CC-BY-SA unless otherwise noted.