Lucentine is the het ship between Jill Valentine and Parker Luciani from the Resident Evil fandom.

Jill and Parker became partners in 2005 after he left the F.B.C. to become a member of the B.S.A.A.

After an investigation mission on a beach near the wreckage of city Terragrigia, their boss receives a call with information that their previous partners, Chris and Jessica, have disappeared and the last known coordinate is in the middle of the Mediterranean Sea.

The duo is sent on a search and rescue mission, sailing in a tow boat in the middle of a storm and the coordinates lead them to find the "Queen Zenobia", a large abandoned cruiser ship. There, they immediately realize that something is wrong and as soon they are attacked by strange creatures and cornered by a mysterious masked man, they fall into a trap.

They wake up hours later, separated and without their weapons, but manage to escape and find each other again while exploring the monster-infested ship. Using a good teamwork to retrieve their equipment back, they continued their investigation, overcoming any obstacles that came their way.

They managed to survive and discover important pieces of the mystery that surrounds their mission until Chris and Jessica come to rescue them.

After switching partners and being apart for a while, when the ship is collapsing, Jill finds Parker with a gunshot wound in one of the halls. She tries to carry him to the emergency exit, but Parker realizes he is very slow and heavy and they are running out of time, so when one of the metal walkways they are on collapses, even with Jill using all her strength to pull his up, he lets go so she has a chance to survive.

Although, after that, Jill struggles to survive and finish this mission for him. Parker survives and is found on the coast, to be rescued by the B.S.A.A. hours later.

“Jill! Are you OK!?”
— Parker when he reunites with Jill after her encounter with Ooze Racha(e)l.

“Damn it! Jill! It's not stopping!”
— Parker to Jill while they're trapped at the engine room on the verge of drowning.
“Don't give up, Parker.”
— Jill, offering moral support while they both're on a verge of drowning.
Parker – “No problems, eh, Jill?”
Jill – “A little close for comfort.”
— After Jill manages to open the hatch and they gets out of the water.

Parker – “Dammit. I don't have a signal. Maybe the antennae array is out.”
Jill – “It's on the observation deck. Maybe we can fix it. I'm sure the view is nice. *winks*”
Parker – “Me too. Let's move.”
Jill – “*grins*”
— Preparing to fix the emergency communication line on Zenobia.

“Alright, we're finally here. And... it's night out, so there's nothing to see.”
— Parker comments on the promised "nice view".

Lucentine is a very rare pair and fan works are difficult to come by as Jill is most often shipped with Chris Redfield or Carlos Oliveira. Currently, there are no fanfiction about them on AO3. 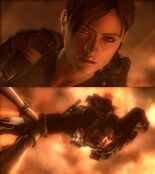